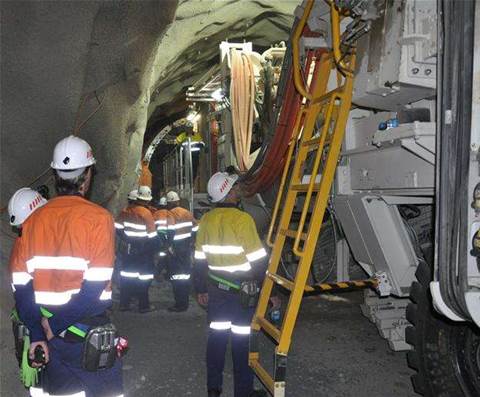 Rio Tinto has revealed it has gained three hours of production time by deploying an automated load haul dump system at its Northparkes mine in central western NSW.

Deployment of the system, which uses Sandvik's AutoMine technology, was completed in June 2011. (pdf)

"Since we've put the LHD automation system in, we're now mining over shift change, blasting and re-entry, so there are up to three hours a day when there's absolutely no one in the mine, but we're still producing," Cronin said.

Rio Tinto is becoming increasingly vocal about its production gains from technology deployments, such as those under its Mine of the Future program of works.

Late last year, the company said it found an extra seven million tonnes a year in iron ore capacity within its existing Pilbara operations courtesy of the "deep system visibility" delivered by investments in IT, automation and remote-controlled systems.

The LHD deployment at Northparkes is already seen as a case study for Rio Tinto, which is expanding the system to Western Australia.

In a separate video prepared for the same conference, Rio Tinto provided a significantly more detailed view of the transport, assembly and operation of a 64-metre long tunnel boring machine it is trialling at the same mine.

The system is said to impart much less stress into the rock than traditional drill and blast methods of extraction.

Such technology trials have also become necessary as miners are forced to dig deeper to find valuable ore.

"As we move into the future minerals will get deeper and harder to extract and hazards will probably increase," Cronin said.

"Northparkes — being a mine which [has] very stable geology [and a] very stable workforce — is the perfect place to test technologies that will help us get those minerals out in the future."

Cronin indicated that parts of the mining sector are still challenged over the "fear of change" that comes with technology, such as automation.

He believed that long-running automation use at mines such as Northparkes proved "we've been doing this long enough ...where this is just another technology we're putting in."

But he cautioned not every investment would add value.

"We've put technologies in that haven't worked," he said. "Not every technology is a winner."