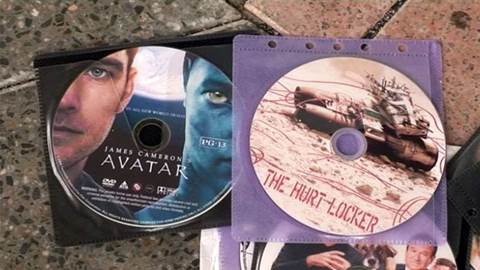 Officers raided the store yesterday and seized 1,500 allegedly pirated films and "a burner operation" allegedly used to make them.

"It is alleged that customers to the store chose titles from a folder full of new and yet-to-be released movies, and the pirated copies were then burnt to order," Police said.

"The pirated movies were selling under the counter for between $5-15 per disc."

A man in his mid-thirties was assisting Police with their inquiries.

A day earlier, officers raided a house in Claremont Meadows in Sydney's west following a tip-off from the public.

There they allegedly uncovered 1,500 pirated DVDs along with computer equipment used to make them.

"A woman in her thirties is helping Police with their enquiries and copyright charges are expected to be laid," Police said.

The total street value of DVDs netted in the two raids was over $25,000.

The raids came days after the Australian Federal Police shut down a website and seized illegal DVDs and computer equipment in a raid on a property in Canberra's northwest.