The Victorian Ombudsman has blamed poor management and a lack of ICT competence for ten State Government projects that will cost $1.44 billion over budget to complete.

Ombudsman George Brouwer launched an own-motion investigation into the “high-risk, high-dollar and complex” projects in April, following “disappointing results” of ICT projects in the state.

Despite recommendations and reports to Parliament by Brouwer and Victorian Auditor-General Des Pearson in recent years, there was “little sign of lessons learnt in the public sector”, Brouwer said (pdf).

The Ombudsman studied ten ongoing, recently completed and discontinued projects that had a total budget of $1.3 billion originally but could cost up to $2.74 billion upon completion. 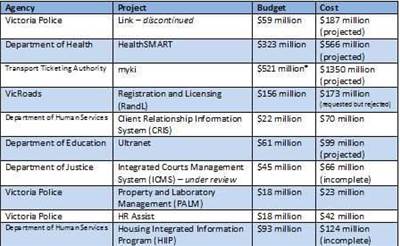 (*According to myki, its original budget was $999 million. The ombudsman said $521 million was the budget for capital and operating expenditure for the build, over four years, including Metcard running costs, as per Myki's 2004 business case.)

Brouwer blamed poor leadership and accountability for failures, noting that the Department of Treasury and Finance relied too heavily on agencies for project governance.

Agencies did not appear to hold responsible staff to account for project shortcomings. The report revealed only two instances of staff leaving their jobs over failure to deliver – both related to myki.

Meanwhile, project staff were “rewarded for their part in projects that ran over budgets and timelines”, Brouwer wrote.

Agencies appeared to take a “tick in the box” approach to probity and risk management, failing to document or manage issues throughout the project.

And although the state relied on agencies’ business cases to inform investments, those submissions tended to be overly optimistic and appeared to “have been viewed only as a mechanism to obtain funding”.

The ombudsman reported that:

The need to attract funding may also have driven agencies to create complex, “big vision” ICT projects to compete with more politically attractive projects like hospital beds or police numbers.

“In some cases, costs and timelines appeared to be based on hope, rather than evidence or comparisons with similar projects ... and in spite of advice from experts and vendors,” Brouwer wrote.

“It may also be a reflection of a perceived need to present best-case scenarios to have any success in achieving project funding. Optimism bias led to significant delays, cost overruns and unachieved benefits in several projects.”

The Department of Finance rejected the ombudsman’s recommendation that it establish a fund specifically for replacing or upgrading major ICT systems.

It accepted a majority of the ombudsman’s 41 other recommendations for improving leadership, accountability, governance, planning, funding, probity, procurement and management of future projects.

Upon the report’s release today, State Technology Minister Gordon Rich-Phillips was quick to state that all ten ICT projects investigated “were the responsibility of the former Labor Government”.