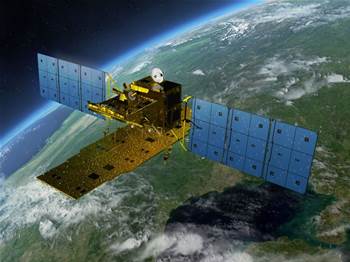 Victoria's government is taking to the skies to detect water leaks underground, and has completed a pilot program using high-tech satellite scanning to reduce water wasted through broken pipes.

State Minister for Environment, Climate Change and Water, Lisa Neville, says up to 160 million litres of drinking water is lost to leaks in Victoria every day. This equates to 12 percent of the total annual water revenue for Victoria.

In response, Victoria's 17 water corporations and VicWater partnered with an Israeli company called Utilis to undertake a pilot in December that would verify whether they could in fact detect leaks through scans from space.

A 3000 square kilometre area of north Melbourne was scanned from the Alos-2 satellite, operated by the Japanese Aerospace Exploration Agency (JAXA), orbiting some 650 kilometres above ground.

Microwave reflectometry, using electromagnetic signals with a wavelength that can penetrate the ground, is deployed by the Utilis system to detect a spectral signature that matches drinking water.

Aerial images from the satellite are overlaid on GIS maps to identify where the leaking pipes are located, and their sizes. Field crews can then be dispatched to repair the leaks.

The Utilis system can pick up leaks as small as 85 to 246 millilitres per minute. It found 18 leaks in just four days in different Melbourne suburbs during the pilot.

After the December scans, Utilis compiled the satellite imagery for two months and then field validation of the leaks started in February.

“We are hoping to have a preliminary report in March that will tell us how this technology has performed in the trial so far,” Brennan said.

“If it meets the pilot objectives, it could have widespread benefits for the water industry and our customers.”