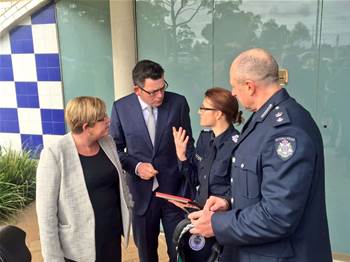 Premier keen to catch up with fellow states.

Victoria will join its fellow states by equipping frontline police with mobile technology when it goes to market for 8500 smartphones and tablets that could end up in use by Victorian cops by Christmas.

The state police force is looking to shed its reputation as a technological laggard by buying up big on the mobile devices, which will be paid for out of a $227 million police technology fund.

Victoria Police today opened up bids for an end-to-end mobility solution that will include devices for all eligible frontline officers, mobile device management, support, user-facing apps, plus all of the linkages that will allow officers to search and enter data into central crimes databases and vehicle registers.

The first instalment of 100 to 400 devices will be on the streets by late 2016 or early 2017, which Victorian premier Daniel Andrews conceded was not a moment too soon.

“It just goes to show how much catching up there is to to be done, to think in 2016 there wouldn’t be a crook out there that doesn’t have an iPhone, yet we have got our Victoria Police members using fax machines, pens and paper,” he told reporters in Melbourne.

“We have fax machines that are still central to local crime reports, so reports of incidents can make their way into the centre of town to be processed and entered into the database.

“That’s very old technology, it is perhaps not technology at all."

The rollout - which could expand past 10,000 devices for the state’s 14,500 frontline police - will put Victoria on the same footing as Australia’s biggest emergency services mobility push to date in Queensland, where the government has funded 8250 tablets for officers.

The Northern Territory and Tasmania have both completed force-wide mobile distributions across their smaller headcounts, and South Australia has bought 850 tablet devices.

“This is one of the biggest investments in new technology that we have seen in Victoria Police in a very long time,” police minister Lisa Neville said in a statement.

“It is extraordinary in this day and age that our officers actually aren’t working with this technology.”

She estimated the new kit could save each officer 30 minutes per eight-hour shift, adding up to an equivalent to 500 extra full time officers on the streets.

The premier said the agency was remaining “as brand neutral as possible” throughout the tender process, which will continue through the second half of this year.

But tender documents reveal Victoria Police has a stated preference for iOS devices because they have been certified by the cyber security experts at the Australian Signals Directorate.

“Tenderers may propose the use of alternative devices; however they must fully satisfy the above security requirements listed for Apple iOS devices,” it told prospective bidders.

Whoever wins the contract will inevitably come into contact with the notoriously shaky LEAP crimes database, a 25-year-old mainframe system the force has failed to replace on two separate occasions to date.

Tender documents say the fully-supported mobile solution it wants will allow officers to search LEAP by name, DOB, location, or even tattoos or scars from their phone or tablet, and to enter incident details back into the system from the same machine.

However, the premier would not be drawn on whether his funding goodwill might soon extend as far as an extremely overdue third attempt at replacing the dilapidated LEAP infrastructure, which could cost in the vicinity of $150 million based on past attempts.

He pointed to the work already underway to create a single-view intelligence portal, but said “I’m not here to make any announcements about overhauls of databases”.

“There might be some more announcements to make about some of those tech issues but not today.”