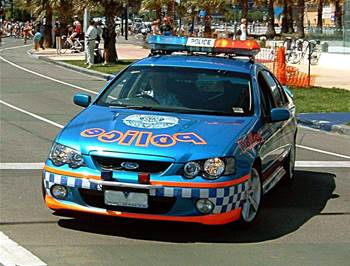 Also ask for remote fuel cut off and braking control.

Police officers in Victoria have put forward a case for GPS tracking devices to be shot onto cars speeding away from officers in order to reduce the risk involved in high-speed chases.

Officers also asked for remote vehicle disabling technology that would cut off a car's fuel supply and take control of its brakes.

The ideas arose from a survey of almost 3000 officers by the Victorian Police Association, which found 93 percent of the surveyed officers were unhappy with the force's current pursuit policy.

Police wanted their superiors to invest in technology that would allow them to avoid or bring pursuits to a safe end.

A "fleeing vehicle tagging system", as termed in the survey, would allow a "laser guided projectile" to be fired at a fleeing vehicle so police can track its movements via GPS.

Police could then follow and monitor the tagged vehicle at a safe distance and avoid a high-speed chase.

Officers also suggested implementing a remote disabling system that would cut off a car's fuel and control its braking capabilities.

"Remote vehicle disabling technologies" would send signals to a vehicle that would restrict its fuel supply and take control of its braking system to bring it either to a walking pace or complete stop.

Police suggested using the General Electric OnStar system as a starting point for the development of such a capability.

"If we are going to keep the [current pursuit] policy let's be a flagship police force for new methods of stopping/tracking these stolen vehicles who evade ground units."

While the report noted that such suggestions had previously been dismissed by the 2012 Victoria Police Inspectorate Review as "too risky, difficult and costly to operate and execute", it argued that many of the suggested technologies were at the time in their infancy, limited, and expensive.

"Given the pace of technology and the four years that has elapsed since these supplementary options were last considered, the Association supports a reconsideration of these options – a task beyond the scope of this review – and cautions against a summary dismissal of member’s ideas," the Police Association argued.

"It is imperative that these options not be superficially dismissed by Victoria Police as being too dangerous, or too expensive as to date no genuine assessment is known to have been conducted using reliable data or rigorous assessment."

The call to change the existing pursuit policy follows the death of two innocent bystanders within three weeks last year after police chose not to chase stolen cars.