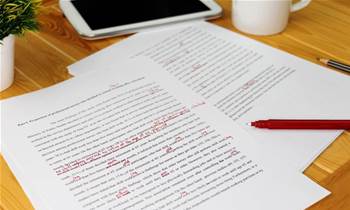 The University of Technology Sydney (UTS) is using natural language processing to give students and academics instant feedback on their reflective writing.

The AcaWriter - short for Academic Writer - was developed by the university’s Connected Intelligence Centre (CIC).

The centre serves as a platform for UTS to explore the use of big data and artificial intelligence in improving research and education.

The project started in 2015 when the university wanted to improve the quality of reflective writing by students, but found some of its academics weren’t necessarily writing experts themselves.

AcaWriter analyses and provides annotated feedback on how students have used, or failed to use, language and writing structures to “make their thinking visible” and align with academic conventions.

It is able to identify concepts, people, places and language devices that signal to a reader how knowledge is presented and claims are made.

“It's not that the machine understands a piece of writing in the way that a human does, but it can spot interesting patterns that correspond to good academic ‘rhetorical moves’ and draws attention to areas for you to reflect on,” Buckingham Shum said.

“It’s about improving the quality of what they end up submitting.”

AcaWriter figures these rhetorical moves through natural language processing, which is being developed as an adaptation of the Xerox Incremental Parser (XIP) designed by Naver Labs Europe (formerly the Xerox Research Centre Europe).

However, Buckingham Shum told iTnews the CIC will be investigating the possibility of using machine learning to boost AcaWriter’s capabilities in the future.

He added that the tool doesn’t grade students or send writing samples to teaching staff so that “students don’t have to worry that they’ve made mistakes or that academics are going to see their very early drafts".

Buckingham Shum said the tool is currently being piloted in several faculties, with a university-wide rollout for all staff and students planned once the infrastructure has been upgraded.

“A stripped down demonstration version for the public to try is being designed right now,” he added.

Buckingham Shum wrote on the CIC’s blog that the infrastructure behind AcaWriter is available open source.

Its further applications in the tertiary sector are being investigated through the Higher Education Text Analytics project funded the Australian Technology Network of Universities.