US tech giants ride high on Aussie dollar's back 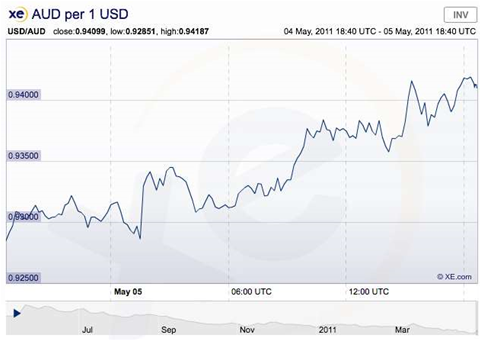 Australia's soaring dollar made its otherwise stagnant IT services market the fastest growing by US dollar revenue in the world, analyst firm Gartner reported.

The dollar strengthened throughout 2010 to hit a high of US$1.10 this week. This pushed the local IT services market's growth in US dollars to 19.4 percent, Gartner found.

The Australian IT services market was worth $22.8 billion in 2010 -- around US$24 billion at today's US exchange rate.

Australian contracts accounted for about a third of the US$69 billion spent on IT services in Asia Pacific. The regional market grew 16 percent last year.

Across the globe, business and government spent US$793 billion on IT services last year, up just three percent from 2009 figures.

Canada, the next fastest growing market in US dollar terms, grew 13 percent. The North American region, which accounts for almost half the global spend, grew 3.6 percent.

Market growth in local and US currency.

Although Australia's value to US-based companies grew significantly, not much else changed within the nation.

Gartner attributed Fujitsu's debut on Australia's top five to its 2009 acquisition of Telstra’s Kaz Group. Fujitsu had 3.4 percent of the local IT services market.