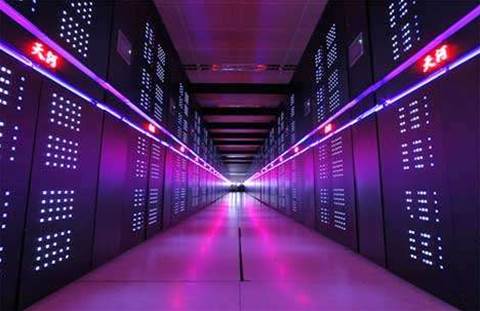 Wants exaflops of computing power applied to exabytes of data.

Currently, the world's fastest supercomputer is China's TianHe-2, built with Intel Xeon processors. According to the TOP 500 ranking list of supercomputers, TianHe-2 performs at a tested 33.9 tera Flop/S and has a theoretical peak performance of 54.9TFlop/s while consuming 17.8MW of energy.

A blog post jointly written by the White House office of science and technology policy deputy director for technology and innovation Tom Kalil and Jason Miller, deputy assistant to president Obama outlined the administration's goals for the NSCI.

Among those is the goal of building a high-performance, exascale computing system capable of one exaflop over the next decade.

Development of exascale HPC systems has been stalled due mainly to the large amounts of energy required, which in turn generates heat that is difficult to dissipate efficiently.

The problem of excessive energy consumption and other engineering challenges such as how to develop efficient tools apps for massively parallel computing are expected to be solved by 2020 currently.

Kalil and Miller said that there's more to building an exascale system than just processor performance.

The HPC system must also have the ability to manipulate vast and rapidly increasing quantities of both numerical and non-numerical data, as per a recommendation from the US president's council of advisors on science and technology.

This would require work to develop large-scale, exabyte storage technologies for the HPC, Kalil and Miller noted.

Systems capable of exaflop performance could provide full modelling of turbulence and more dynamic flight conditions in simulations for the US space program, and also give medical researchers the tools to process large volumes of health and genomic data.

Weather simulation and national security needs such as modelling military vehicles to become resistant to improvised explosive devices will also feature in the work of the NSCI.

In February this year [pdf] the US Department of Commerce banned the sale of Intel's Xeon and Xeon Phi processors to four Chinese research institutions that built the TianHe-1 and TianHe-2 supercomputers, after introducing export license requirements last year.

The government agency said the two supercomputers "are believed to be used in nuclear explosive activities" which run counter to US weapons export regulations.