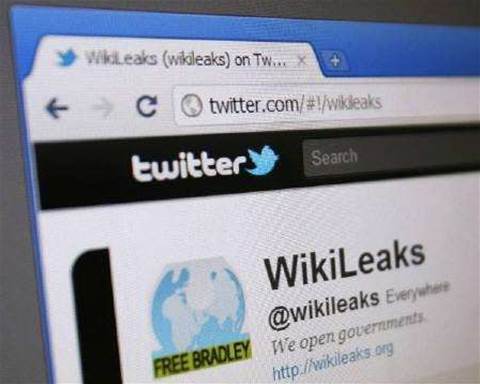 A U.S. court has ordered Twitter to hand over details of the accounts of WikiLeaks and several supporters as part of a criminal investigation into the release of hundreds of thousands of confidential documents.

The December 14, 2010 subpoena [PDF] obtained by the U.S. Department of Justice and published by online magazine Salon.com on Friday said the records sought from the microblogging website were "relevant to an ongoing criminal investigation."

The information sought by the government includes all connection records and session times, IP addresses used to access Twitter, email and residential addresses plus billing records and details of bank accounts and credit cards.

"WikiLeaks strongly condemns this harassment of individuals by the U.S. government," WikiLeaks said in a statement issued by its London lawyer, Mark Stephens.

Iceland's Foreign Minister Ossur Skarphedinsson told Icelandic media on Saturday his government planned to lodge a protest on Monday with the U.S. ambassador in Reykjavik.

Speaking on state radio, Skarphedinsson said the U.S. authorities' behaviour was unacceptable and his government would do everything in its power to protect Jonsdottir.

The U.S. government is examining whether criminal charges can be brought against Assange for helping to make public hundreds of thousands of confidential U.S. diplomatic cables that embarrassed Washington and several of its allies.

WikiLeaks said three of the four individuals targeted by the U.S. Department of Justice had never worked for WikiLeaks and were private citizens who supported its public disclosure work voluntarily as activists or politicians.

Two of them were instrumental in helping WikiLeaks make public the Pentagon video that showed a U.S. helicopter crew firing on Iraqi civilians, the statement said. WikiLeaks is instructing its U.S. lawyers to oppose the subpoena, he added.

Jonsdottir, a member of Iceland's foreign relations committee wrote on Twitter that she was seeking legal advice and had spoken to Iceland's minister of justice, who was looking into the case.

Speaking to Sky News on the telephone from Reykjavik, she said the U.S.'s actions were outrageous.

"I have not conducted any criminal activity. I find it to be troublesome because the vice president of the United States has labelled WikiLeaks as a cyber-terrorist organisation," she said.

The subpoena gave Twitter three days to provide the records and ordered the San Francisco-based company not to inform the users under investigation.

A federal judge unsealed the order on January 5, 2011 after Twitter requested the right to inform the people involved.

"To help users protect their rights, it is our policy to notify users about law enforcement and governmental requests for their information, unless we are prevented by law from doing so."

In its statement, WikiLeaks said the legal step taken by Twitter had made public the existence of a criminal investigation by the U.S. government into the website's work.

WikiLeaks called on Facebook and Google to unseal any similar subpoenas requesting information about its operations.

Stephens said the subpoena showed that the U.S. authorities were having difficulty putting together a case "criminalising the actions of a journalistic source" as they try to identify the source of the leaked documents.

"What they are trying to do is hoover data up to see if anything can identify the source," the lawyer told Reuters.

Washington has accused WikiLeaks of acting without regard for the safety of those named in classified cables containing candid remarks about foreign leaders and governments.

The State Department said on Friday it has warned several hundred people worldwide it believes may be imperiled and has helped a handful relocate to safer places.

(Writing by Anthony Boadle, reporting by Stefano Ambrogi in London and Dan Whitcomb in Los Angeles and Omar Valdimarsson in Reykjavik; Editing by Paul Simao).