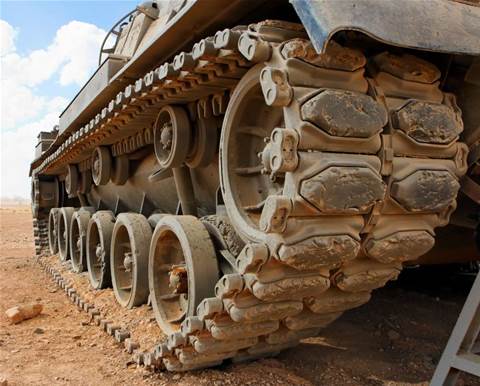 The US Department of Defense has appealed to Java developers to help build a new library of touch screen gestures it hopes to use to replace keyboards and mice in tanks and other military vehicles.

The gesture library is being developed primarily for "life and death" situational use in the US Navy vehicles.

It will also be made available for public use under an open source license in hopes of garnering further development from third party developers.

Gestures will be deployed on touch screens mounted in tanks and other vehicles.

The screens are considered a relatively inexpensive replacement for keyboards and mice that consume too much space and are outdated.

The touch screens will undergo rigorous testing before deployment, including being put under fire and pummeled with machine guns.

"We definitely don't want the blue screen of death in our tanks - when you're getting shot at, you don't want to see a 404 error."

Get paid for gestures

The decision to fund the internal project came out of frustration at a lack of touch gesture libraries available on non-proprietary hardware.

Though some were available for the .NET framework, Niepraschk considered them "clunky" and unusable due to the government's increasing focus on Java development.

The Navy has developed 30 gestures to date using the Multitouch for Java (MT4j) framework, which was initially written to enable touch gestures in video games.

To date, it has been made available for 32-bit Windows operating systems as well as versions of Android.

Faced with a lack of standards around what movements are invoked by differing touch screen gestures, the US Government relied on internal psychological research among Navy personnel to determine the most natural or comfortable touch gestures.

They hoped to avoid side effects of touch screen use like "gorilla arm", often found when tiring of using an upright screen.

According to Niepraschk, the department also had to carefully tweak any gestures developed with greater range for error to account for use in tanks while driving.

Though the project team has been careful to align its development with the result of the psychological examinations, Neipraschk used the JavaOne conference held earlier this month in San Francisco to appeal for greater help from other developers.

Those who contribute gestures that can be patented will receive a small payment.

Neipraschk said open sourcing the project will be "painful" due to ongoing restrictions around technology sharing policies in the Department of Defense.

"However, the Navy and the Government want this to be open sourced," he said. "If it's open sourced, people can help us do it and we don't have to pay as much for it."

The Department of Defense hopes to appeal to younger recruits used to touch screen smartphones and tablets.

"It's definitely happening with the phones, the iPads, all the stuff out there, the days of the keyboard and the mouse are limited," Neiprasch said.

"We realise that these young kids using the tablets and smartphones, when they turn 18 and enlist and we stick a keyboard in front of them, they'll be like 'what is that?'"

James Hutchinson travelled to the JavaOne conference as a guest of Oracle.