US cops charge teens over DDoS for hire services 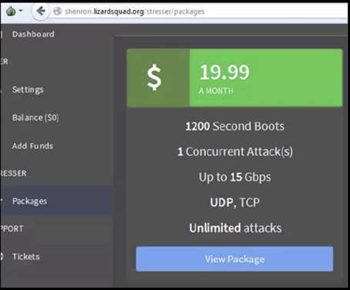 US federal police have laid charges against two teenagers who allegedly ran so-called booter or stresser sites that provided distributed denial of service attacks for hire.

The arrests were made as part of a series of investigations into the high-profile Lizard Squad and PoodleCorp hacking groups.

Two 19-year-olds, Zachary Buchta of Maryland, and Bradley van Rooy of the Netherlands, face criminal charges for conspiring to launch destructive attacks around the world in return for payments of US$19.99 (A$26.98), US$29.99 or US$39.99, depending on the length and strength of the DDoS.

Buchta was known online as "pein", @fbiareloosers and @xotehpoodle, while van Rooy called himself "uchiha", @UchihaLS and "dragon".

The two are alleged to be behind thousands of DDoS attacks, often using the vDOS attack service run by two Israeli men arrested earlier this year.

Several lizardsquad.org and poodlecorp.org domains were seized, along with Buchta and van Rooy's Twitter direct message conversations, which contain IP addresses that pointed to the pair's locations.

One direct message from van Rooy included a photo that showed he lived nearby a police station in the Dutch city of Leiden.

The two are also alleged to have operated an automated phone harassment service in 2015.

According to the criminal complaint [pdf], for US$20 a month, phonebomber.net would call victims from spoofed phone numbers every hour, with pre-recorded threatening messages.

Buchta and van Rooy are under arrest in the US and the Netherlands. They face up to ten years in prison if found guilty.

Other members of the loosely organised Lizard Squad have been rounded up by the authorities over the past year.

In August 2015, British police arrested six young men for using the Lizard Squad DDoS tool. The force embarked on an education campaign to dissuade others from taking part in similar activities.