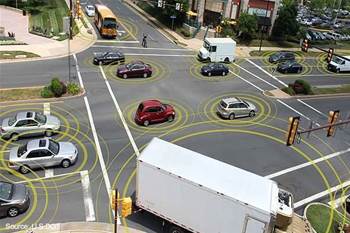 United States car owners could soon have their vehicles equipped with wireless transmitters in an effort to prevent crashes, if a plan by the US automotive safety regulator is approved.

The US National Highway Traffic Safety Administration is pushing for the introduction of vehicle-to-vehicle transmitters and accompanying software to prevent hundreds of thousands of crashes annually.

In a report released this morning, the NHTSA said after spending more than ten years researching the technology, it had found that v2v communications - a system designed to transmit basic safety information between vehicles to warn drivers of possible collision - had the potential to shift the country from helping people survive crashes to avoiding them altogether.

The agency estimated the transmitters and software would cost up to US$350 per vehicle in 2020 and up to US$2.1 billion overall in that year.

It plans to introduce a set of draft standards by 2017 setting minimum requirements for the v2v transmitters, which would mandate that all new cars have the technology installed.

The proposal has drawn support from eight of the world’s largest car companies, including Ford, General Motors, Toyota and Volkswagen, who have been developing v2v technology in partnership with the US Government over the last year.

The proposed v2v system involves cars swapping messages about their geographic positioning 10 times a second, as well as how quickly they are moving and in what direction, to alert drivers if they are on path to collide with another vehicle. The radio signals can move up to 300 yards.

The NHTSA reported that if just two of the optional functions in the system are implemented for every US car  - specifically one that warns a driver ahead of running through a red light, and another which calculates whether the driver has enough time to make a left turn in front of another car - up to 592,000 crashes and 1083 lives could be saved each year.

“Put another way, V2V technology could help drivers avoid more than half of these types of crashes that would otherwise occur by providing advance warning,” the agency reported.

The agency will now consult with the public and relevant stakeholders on the proposal ahead of a planned notice of proposed rulemaking by 2016.

Similar technology is currently the subject of resaerch by National ICT Australia (NICTA) and is being trialled on the NSW south coast on a smaller scale.