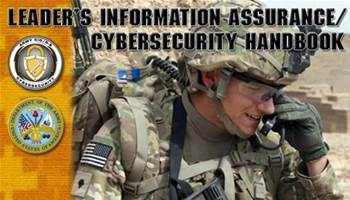 The United States Army has published a new cyber security manual which will be required reading for its commanders, containing assessment tools and information to help units identify weak spots and adopt best practises.

Called the Leader's Information Assurance / Cyber Security Handbook, the manual is part of an awareness campaign to improve the security posture of the US army.

In a memorandum [PDF] dated February 1 the US secretary of the army John McHugh said "cyber attacks threaten army networks and our information every day, putting our operations and people at risk."

"We must change our culture, enforce compliance and ensure that people are accountable for proper security procedures," McHugh wrote.

From now, Army commanders must make sure that their subordinates comply with information assurance and cyber security procedures.

Several directions are given by McHugh to improve the army's security posture. A web-based self-assessment tool has been set up by the US Army, that commanders must complete, recording the three weakest areas of their units and also reviewing their security practices to ensure they meet federal systems management requirements.

The United States has been sparring over cyber issues with China recently. US defence secretary Chuck Hagel publicly named China as a cyber threat at a security conference in Singapore last week and called for guidelines to avoid conflict on computer networks.

President Barack Obama will also bring up the topic of cyber security this week when he meets his Chinese counterpart Xi Jinping.

Military forces and leaders are increasingly taking an aggressive posture on network security, and developing defensive and offensive doctrines with specalised units to respond to threats. Last month, Indonesia announced it would set up a cyber defence force in response to millions of attacks against government websites over the past year in the country.