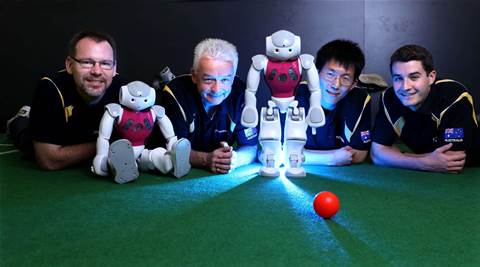 Germany not as successful at non-human football.

A team of robots programmed by computer science students at the University of NSW have claimed the champion's title at the annual global RoboCup robot football tournament, taking down their German opponents five goals to one.

The university's rUNSWift team took on Germany's Nao-Team HTWK, run by computer science students from the country's Leipzig University of Applied Sciences, in the grand final of the 2014 RoboCup Standard Platform League (SPL), held in Brazil.

The rUNSWift team put in a strong effort to ensure a German team was not able to take out both the human and robot football world cups in one year, and additionally to avenge the 4-0 loss Australia suffered against Germany in the 2010 human FIFA World Cup.

Each RoboCup team competes with identical robots - the current standard model is the Aldebaran Robotics humanoid Nao - which are required to operate autonomously without external human or computer control.

The SPL previously mandated the use of Sony's AIBO robot, but the company stopped manufacturing the model in 2006, forcing the league to search for a new robot and eventually select the Aldebaran Nao.

A team is made up of a maximum five players, not including a robot 'coach', which is allowed to sit on the sideline observing the game while sending "tactical and strategic" advice to the players via a GameController interface - which uses user datagram protocol (UDP) to connect to the robots.

One player can be designated as a goalkeeper and is the only player allowed to use its hands.

The 'pitch' itself is 10.4m long and 7.4m wide, and the players use a Mylec orange street hockey ball. The teams play for about 20 minutes in total, broken up into two 10 minute halves and a 10 minute half-time break.

The RoboCup was founded in 1997 with the goal of developing a robot team good enough to beat the human champions of the FIFA World Cup by 2050.

Teams from all over the world participate in the league, with around 20 teams involved in this year's cup.

The 2014 cup marks the first time UNSW has won the RoboCup SPL league since it rebranded from the four-legged league in 2004.

The rUNSWift team's best SPL result prior to yesterday's win was second place in 2010.

The team is predominantly comprised of undergraduate students from the university's School of Computer Science and Engineering, who use the challenge as part of their fourth year thesis.