Uber to trial its air taxis in Melbourne 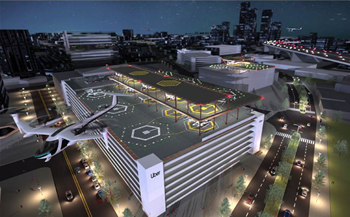 Named as first pilot site outside US.

Uber is set to use Melbourne as an international pilot city for its planned air taxi service, with test flights to begin as early as 2020.

The rideshare service operator made the selection announcement at its Elevate Summit in the United States; Australia had been one of several countries being scoped as trial locations.

Uber’s general manager for Australia, New Zealand and North Asia, Susan Anderson, said that the Victorian state government had “been highly supportive” of the proposal.

Uber’s flying taxi concept has been around for several years, under the name Uber Air.

““Australian governments have adopted a forward-looking approach to ridesharing and future transport technology,” Anderson said in a statement.

“We will see other Australian cities following soon after.”

Uber claimed that its Air service could cut the trip between Melbourne Airport and the CBD from between “25 minutes to around an hour by car in peak hour” to “around 10 minutes."

Macquarie’s role would be around “the development and electrification of the skyports that will support” Uber’s air taxis.

Uber claims its skyports should be capable of “handling up to 1000 landings per hour, even within footprints as dense as an acre or two”.

Telstra is set to work with Uber to “over the next 12 months to assess what network infrastructure, connectivity requirements and other capabilities would be needed to support airspace mobility in urban centres,” the carrier’s CEO Andy Penn said.

It appeared Scentre Group wanted in because air taxis could be used to ferry customers to and from its retail locations.

Uber Air is intended to start commercial operations from 2023.

A number of aviation companies are currently prototyping vertical take-off and land (VTOL) aircraft - essentially helicopters - to be used as part of the Uber Air service.