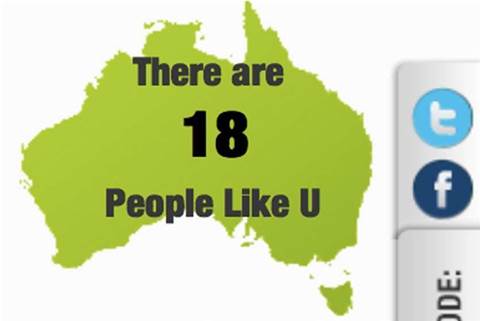 NAB subsidiary UBank has put a billion de-identified transaction records into an analytics engine that allows customers to compare their spending habits with those of other Australians.

Users may input their gender, age range, income range, living situation, post code and whether they rent or own their home.

The site uses that data to serve up average spending habits of people in that demographic, including detailed information on restaurants, housing costs and travel destinations.

Users may also choose to input more detailed data to perform a “financial health check”, comparing their monthly shopping, utilities, housing and communication costs with “people like you” and the average Australian.

UBank chief executive officer Alex Twigg described it as one example of “big data” – a hot topic in many industries for its potential to customise customer-facing services and inform business decisions.

“[PeopleLikeU is] not survey-based; it’s real transactional data, all de-identified so that privacy is maintained,” Twigg told FST’s Technology and Innovation conference yesterday.

“The NAB has been transacting on customers’ accounts for 120 years. We’ve got more data about people than virtually anybody else; even more data than [British retailer] Tesco, I suspect.”

Organisations in Australia’s banking and finance sector in particular have moved to apply big data analytics to individual customer data to inform risk and pricing models.

Others like supermarket chain Coles have aimed to ensure that their data usage remains socially acceptable to avoid appearing “spooky”.

Twigg told iTnews that UBank had “been through all of the things you expect us to do” to protect customers’ privacy. The bank said it adhered to all Australian Privacy Commissioner guidelines.

He noted that the site would not reveal how many de-identified customer records went into a PeopleLikeU comparison should there be less than ten matches.

“There’s no way of understanding who an individual customer is,” he said. “It’s aggregated up from individual transactions and de-identified all the way through.

“We’ve stripped out all of the names, addresses; all we know in PeopleLikeU data is what transaction occurred, when it occurred and how much it occurred for.

“Instead of having unique identifiers like names, account numbers, we’ve just allocated categories – the age of the customer, where they live, etcetera.”

Edited at 1pm on November 13: The article originally indicated that UBank had consulted with the Australian Privacy Commissioner for PeopleLikeU. The bank has since indicated that this was inaccurate.