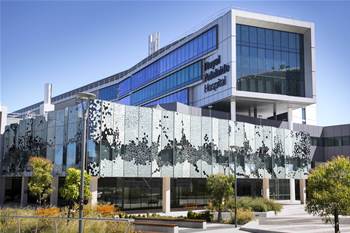 Updated: Transfer from generator back to mains power failed.

Surgeons at the new Royal Adelaide Hospital were forced to stop operating on patients yesterday morning after two software glitches took out power to parts of the building for 20 minutes.

Operating theatres were among several sections of the hospital that were forced to go without electricity at 11am ACDT on Wednesday as a result of the glitch.

SA Health initially said maintenance workers were testing a generator when a single software failure prevented parts of the hospital from being switched back from the generator to mains power.

Later in the day Celsus - the project consortium responsible for the Royal Adelaide Hospital - revealed that in fact two software glitches were behind the outage.

Further investigation had revealed that "the pump that feeds the fuel from the main tank into the smaller day tank that powers the generator did not function as it should have".

"Because of this, the day tank had insufficient fuel to complete the four hour maintenance test and automatically switched to return to mains power  after 2.52 hours of testing," Celsus said in an update.

"The second software outage occurred at this point, with the generator unable to return to mains power, resulting in the outage."

Celsus said it would prepare a full report on the incident for the state government.

The health department said it had received no reports of adverse patient outcomes as a result of the power failure.

Australian Medical Association SA president and surgeon William Tam told media the power went out as he was in the middle of a complex procedure on an elderly man.

He said his team had to make the call to complete the procedure in the dark as quickly as they could. His patient was unharmed.

The AMA told media as many as 14 operations were underway at the time of the outage.