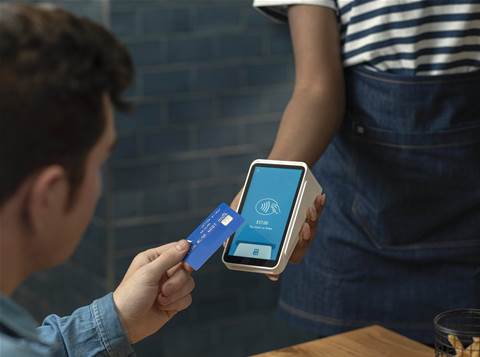 Jack Dorsey’s Twitter account may have been hacked this week, but that hasn’t stopped the founder of Donald Trump’s favourite communications tool from jetting into Melbourne to push his latest payments gadget to barristas, hipster barbers and artisan bakers.

And a spot of bank bashing.

Dubbed the Square Terminal, the upsized gadget will feature a colour touch screen, accept all cards bank terminals currently do but will not lock clients into annual or monthly contracts or minimum transaction volumes.

It takes tap, mobile tap, contact chip and, if need be, mag stripe and will try to capture market share from banks and the likes of Tyro that have carved out a lucrative niche in over the counter sales.

“We’re growing with our sellers, introducing new hardware that is still easy to access and quick to set up, but is also designed specifically to give bigger and more complex businesses better options when it comes to choosing a payments platform,” Dorsey said.

Crucially, the terminal will natively accept proprietary debit cards – that the good old fashioned SAV or CHQ cards running over eftpos rails – rather than making consumers try and dig out a scheme substitute with a Mastercard or Visa bug.

The inclusion of eftpos is a major nod to the veteran payments platform which is gradually clawing back ground in the challenged retail payments market because of its lower fees and broad footprint.

The market Square is targeting are physical merchants that don’t see the value in plumping for a traditional bank acquiring solution.

The bet is that such merchants are prepared to trade-off comparatively higher processing costs against terminal rental and merchant service fees, unpredictable interchange and acceptance costs and hardwired connections that Telstra recently demonstrated can leave shops stranded.

However the low barrier to entry comnes with a decent clip of the ticket.

Square’s cut is 1.6 percent, which is up there with Amex and other premium cards, a price it’s betting will be offset by the low barrier to entry and absence of recurring charges

“They don’t have to sign lock in contracts. No disconnect fees,” Square’s head of hardware, Jesse Dorogusker told iTnews.

“These things are not good for small, medium or large business.”

Perhaps the biggest selling point will be sales and management software that ships native and can be integrated directly into Xero and MYOB.

Dorogusker would not be drawn on what Square's Australian payment volumes or user numbers are, saying the company doesn't disclose such information.

At a hardware and comms level, the Square Terminal is either a Wi-Fi or Ethernet tethered device that becomes a battery powered mobile device when there is signal.

It doesn’t connect directly to the mobile phone network but can be tethered to mobile data, so reception for mobile merchants is still a consideration.

On the fraud front, Dorogusker said the machine runs Square’s proprietary security smarts to spot dodgy cards, but confirmed it does not indemnify merchants against card present fraud. For mobile merchants servicing tourists and accepting a lot of foreign cards, that’s real consideration.

Dorogusker said in cases where fraud did occur, Square advocated for its merchants and negotiated with banks and schemes around chargebacks.