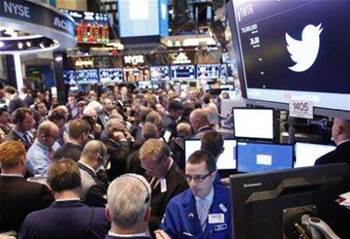 Twitter soared as much as 92 percent in its first day of trading on the New York Stock Exchange as investors snapped up shares in the popular microblogging site in a frenzy that recalled the days of the dot-com bubble.

Sources said the flotation drew strong demand, with investors asking for 30 times the number of shares on offer as they bet on potential growth at the money-losing social media company.

The opening price valued the shares at about 22 times forecast 2014 sales, nearly double that multiple at social media rivals Facebook and LinkedIn.

The shares opened 75 percent above the US$26 initial public offering price set on Wednesday, making it the biggest in a series of huge opening day "pops" for IPOs.

Including restricted share units and other securities that could be exercised in the coming months, the company's market value was over US$28 billion.

Twitter executives including Chief Executive Dick Costolo and the company's three co-founders - Evan Williams, Biz Stone and Jack Dorsey - went to the floor of the NYSE to witness the IPO. The Big Board, which marked the occasion with an enormous banner with Twitter's bird logo along its Broad Street facade, snatched the offering away from Nasdaq after the normally tech-focused Nasdaq stumbled with the larger Facebook flotation last year.

British actor Patrick Stewart rang the opening bell at the exchange together with 9-year-old Vivienne Harr, who started a charity to end childhood slavery using the microblogging site.

"I guess I represent the poster boy for Twitter," Stewart said, adding that he had only been tweeting for about a year and wasn't buying Twitter stock today.

Twitter's building staff opened its offices in San Francisco extra early, at 5:30 a.m. on Thursday. By 7:30 a.m., hundreds of employees had flocked to their 9th floor cafeteria to watch Stewart ring the opening bell on TV while eating "cronuts," a croissant-donut hybrid, made by Twitter's resident chef, Lance Holton.

The microblogging network priced its 70 million shares at above the targeted range of US$23 to US$25, which had been raised once before. The IPO values Twitter at US$14.1 billion, with the potential to reach US$14.4 billion if underwriters exercise an overallotment option.

If the full overallotment is exercised, as expected, Twitter could raise US$2.1 billion, making it the second largest internet offering in the United States behind Facebook's US$16 billion IPO last year and ahead of Google 2004 IPO, according to Thomson Reuters data.

The apparently glitch-free opening capped off what was a textbook IPO for Goldman Sachs Group, which beat archrival Morgan Stanley to the lead position on the deal. Goldman tops the list of US technology bookrunners so far this year, with an 18.3 percent market share, up from 11 percent a year ago when it ranked fifth, according to Thomson Reuters data.

Twitter boasts 230 million global users, including heads of state and celebrities, but it lost US$65 million in its most recent quarter and questions remained about long-term prospects.

It also lacks the ubiquity of Facebook or the "stickiness" factor that keeps people checking the No. 1 social network on a daily basis.

A Reuters-Ipsos poll last month showed that 36 percent of people who signed up for a Twitter account say they do not use it.

Fund managers who got small allocations at the IPO were hopeful the stock would trade down after Thursday's pop.

"We have a target of US$40 and we won't buy more as long as it is trading above that," said Mark Hawtin, portfolio manager of the GAM Star Technology Strategy.

Jerry Jordan, manager of the US$48.6 million Jordan Opportunity Fund, who got a small allocation, said he would buy more of Twitter if it trades down around US$30-US$35.

"A lot of these sexy IPOs have a big pop on the first day and then they grind sideways," Jordan said.