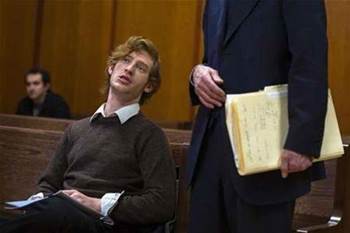 Occupy Wall Street protester Malcolm Harris (L) speaks with his lawyer, Martin Stolar, before a hearing in Manhattan Criminal Court stemming from his arrest in a protest march over the Brooklyn Bridge in New York, December 7, 2012. Credit: Reuters/Lu

An Occupy Wall Street protester who tried unsuccessfully to keep prosecutors from subpoenaing his tweets pleaded guilty to disorderly conduct, in a case that could have broad implications for Twitter users as law enforcement increasingly uses social media to prosecute cases.

The guilty plea in New York City Criminal Court from Malcolm Harris, one of hundreds arrested during an October 2011 mass march across the Brooklyn Bridge, does not mark the end of his legal battle, his lawyer, Martin Stolar said.

With his criminal case resolved, Harris is now free to appeal the judge's ruling that he does not have the legal right to challenge a subpoena served on Twitter for his tweets.

That issue — essentially, whether users of the social media site Twitter own their tweets and thus have standing to challenge prosecutors who seek to use their posts against them -— has rarely, if ever, been taken up by US courts.

The case, and the murky legal ground it covers, has prompted concerns among privacy advocates.

They worry it could set a precedent that social media users do not own their content, putting the burden on Twitter and other companies to step in on their users' behalf when they face criminal prosecution.

"Setting a legal precedent on how this material can be used is much more important" than the minor offense he faced, Harris said outside the courtroom after entering the plea.

Manhattan Criminal Court Judge Matthew Sciarrino ruled earlier this year that Harris cannot challenge the subpoena because his posts belong to Twitter, not to him.

That stance runs contrary to Twitter's own interpretation. The company maintains in its terms of service that users have a proprietary interest in their tweets.

Twitter filed its own motion to quash the subpoena, but Sciarrino rejected that effort as well, ruling that Harris could not have any expectation of privacy when posting tweets to a publicly accessible website.

Twitter has appealed that ruling, and groups like the American Civil Liberties Union filed amicus briefs in support. An appellate court has not yet rendered a decision.

Harris' plea, for which he was sentenced to six days of community service, came as the first of several consolidated Brooklyn Bridge trials began, each of which will include a handful of defendants.

The Brooklyn Bridge protest occurred at the height of the Occupy movement, which drew thousands of activists in New York and across the country angry at what they called a rigged economic system.

Like many of the protesters, Harris had argued through his attorney that police appeared to lead the march onto the bridge before suddenly arresting them for walking on the roadway.

But prosecutors said in court Wednesday that his tweets, which were no longer available online, undermined that defense. Harris boasted that the protesters pushed past police even when they tried to stop the march, according to prosecutors.

Twitter handed over the tweets in September after Sciarrino threatened it with civil contempt and hefty fines. (Reporting by Joseph Ax; Editing by Paul Thomasch and Cynthia Osterman)