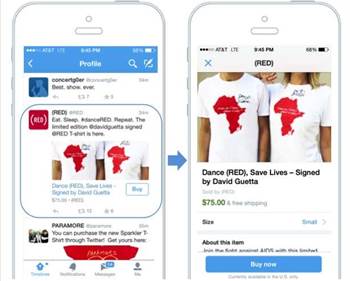 Twitter is testing a "buy" button in select tweets that allows a mobile user to buy directly from a message in their stream.

A small percentage of U.S. users will be able to see the "buy" button from within their Android or iOS apps from Monday, Twitter wrote in a blog post.

Twitter said an entire purchase could be completed in just a few taps of the smartphone screen.

Tapping on the "buy" button embedded in a tweet, the user will be prompted to enter shipping and payment information, which will be sent to the merchant for delivery.

The microblogging service company said it has partnered with social media shopping platforms such as Fancy and Musictoday for the initial test. The payments appear to be processed via Stripe.

Twitter announced that it would soon add artists, brands and nonprofit organisations, such as Burberry, Eminem and Home Depot, to the test.

Facebook has also been testing a "buy" button on its website that will let consumers purchase products that are advertised on its network.

Both social networks have thus far attempted to profit from the massive take-up of their services using sponsored posts that promote the messaging of advertising partners.

Twitter has resisted the temptation to tamper with the raw feed of messages presented to users, whereas Facebook and LinkedIn has used algorithms that purport to promote the most relevant content to the user. This automated moderation has helped both services run a far greater number of sponsored posts and advertisements.