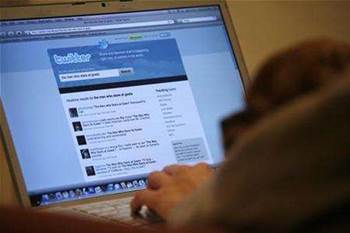 A Twitter page is displayed on a laptop computer in Los Angeles October 13, 2009. Credit: Reuters/Mario Anzuoni/Files

Twitter's steadily tightening grip over the 140-character messages on its network has set off a spirited debate in Silicon Valley over whether a social media company should or should not lay claim over its user-generated content.

That debate has now landed in court.

A San Francisco judge on Wednesday granted a temporary restraining order compelling Twitter to continue providing access to its "Firehose" — the full daily stream of some 400 million tweets — to PeopleBrowsr, a data analytics firm that sifts through Twitter and resells that information to clients ranging from technology blogs to the US Department of Defense.

As part of a broader revenue-generating strategy, Twitter in recent months has begun clamping down on how its data stream may be accessed, to the dismay of many third-party developers who have built businesses and products off of Twitter's Firehose.

PeopleBrowsr, which began contracting Firehose access in July 2010, has continued to buy Twitter data on a month-to-month basis until this July, when Twitter invoked a clause in the agreement that allowed for terminating the contract without cause.

The court's decision to extend the two San Francisco-based companies' contract has not settled the legal spat; a judge will hear PeopleBrowsr's arguments for a preliminary injunction against Twitter on January 8.

But the case could provide the first, in-depth look at issues surrounding one of the Internet industry's most prominent players in Twitter.

In a court filing, PeopleBrowsr founder John David Rich argued the Twitter move was a "commercial disaster" for his business and contradicted the spirit of repeated public statements that Twitter has made regarding its data.

"Twitter has repeatedly and consistently promised that it would maintain an 'open ecosystem' for its data," Rich said in his company's request for a temporary injunction.

In its response, Twitter's lawyers argued: "This is Contracts 101."

Twitter said in a statement after the court decision: "We believe the case is without merit and will vigorously defend against it."