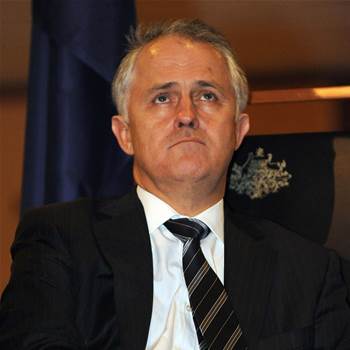 In his Alfred Deakin lecture given to the University of Melbourne last night, Turnbull warned that the proposal — which would see telcos and other service providers retain user metadata for up to two years — was poorly explained and failed to provide users with the ability to safely secure and delete their online data.

"If we have the right to record something, and it is of a private quality unlike company or financial records which must be retained, should we not have the right to delete it?" he asked attendees at the lecture on Monday night.

As well as "formidable practical objections" to establishing the regime for internet service providers and particularly off-shore companies like Google or Skype, Turnbull said he had "very grave misgivings" about the proposal.

"It seems to be heading in precisely the wrong direction," he said.

"Surely as we reflect on the consequences of the digital shift from a default of forgetting to one of perpetual memory we should be seeking to restore as far as possible the individual's right not simply to their privacy but to having the right to delete that which they have created in the same way as can be done in the analogue world."

Turnbull's comments are the first public criticisms of the mandatory data retention regime from the coalition.

While the relevant shadow minister, George Brandis, sits on the parliamentary committee inquiring into the proposed spy agency and telecommunications interception reforms, he has been reluctant to opine on the proposal itself as yet.

Internet service providers have estimated such a regime would cost in the order of $500 to 700 million to establish, depending on the type and quantity of data requested by law enforcement agencies.

Although marked as "up to two years" in a discussion paper released by the Attorney-General's Department as part of the parliamentary inquiry, the exact length of the regime remains unknown. Law enforcement agencies have provided evidence that suggested a push for five-year or even indefinite regimes.

Turnbull also criticised the regime for potentially failing to gather evidence on the suspected criminals the regime was proposed to combat. Echoing telcos' concerns at parliamentary hearings in recent weeks, the shadow communications minister said the true criminals would simply anonymise their online use or choose services that did not confirm to the Government's interception powers.

Instead, he suggested the "best thing Government can do is to enable freedom of speech and communication".

In a separate speech to the CommsDay Congress in Melbourne on Tuesday, Turnbull continued his attack on Labor's National Broadband Network strategy as well as the executives charged with rolling out the network.

He maintained the fixed wireless and satellite components of the network would likely remain in place in the event of a Liberal Government after the next federal election, due to long-running contracts between NBN Co and vendors.

However, he still managed to attack the fixed wireless portion of the network as an irrational approach. He suggested a clean slate approach would see a Liberal Government subsidise the expansion of existing mobile networks rather than the creation of a new, separate fixed wireless network.

"You would have had that network run by people who know how to run wireless networks, it's always a start, as opposed to a startup," he said.

"You would have enhanced and materially improved the quality of the mobile network, mobile broadband and voice network in those areas ... the biggest complaint from people in regional and rural australia is about the poor quality of mobile services. So imagine if you could actually commit some significant funds that would yes, provide fixed wireless broadband, but also upgrade the whole network.

"Because they [NBN Co] bought their own spectum and are in effect building a separate network, that opportunity is lost."

He said a Liberal Government would conduct a "very thorough inquiry" into NBN Co's management to determine the state and future of the network.