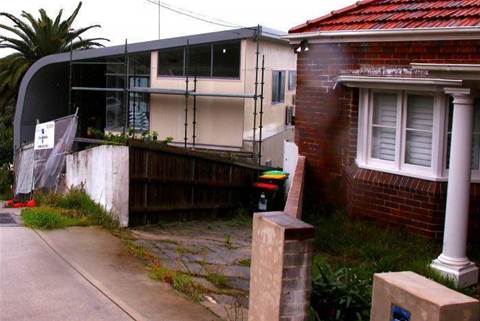 A make-shift fence out the front of a property being redeveloped which has been registered by Cambridge Analytica as its Australian office in Maroubra. REUTERS/David Gray

Firm expanding down under.

The big data company credited with helping Donald Trump win the US presidency has registered a company in Australia and plans to meet the federal government next week, according to documents and a government official.

Cambridge Analytica, which has also said its "psychographic" methods helped the successful campaign for Britain to leave the European Union, has registered an Australian office at a property currently being redeveloped in the Sydney beachfront suburb of Maroubra, corporate filings show.

The presence of Cambridge Analytica in Australia underscores its efforts to capitalise on two high profile successes in the past year and enlarge its footprint in established Western democracies.

The person named in filings as the only shareholder of Cambridge Analytica's Australian operation, Allan Lorraine, confirmed in a telephone call he was working with the firm but declined to comment further.

Nix is scheduled to speak at an Australian data analytics conference next week and will be meeting officials from Prime Minister Malcolm Turnbull's Liberal Party.

"Senior Liberals will be talking to Mr Nix and the Cambridge Analytica team while they're out here in Australia, and will be interested to talk with them about their capacities and what they're offering people in the Australian political system," said Tony Nutt, party's federal director.

Cambridge Analytica says it uses "behavioural microtargeting", or combining analysis of people's personalities with demographics, to predict and influence mass behavior. It says it has data on 220 million Americans, two thirds of the population.

Although it has a population of only 24 million, Australia offers high sales volumes for companies which make money from elections. It has federal elections every three years, among the shortest election cycles of developed nations, and is one of the only countries with compulsory voting enforced by fines at federal, state and local government level.

The Australian arm of Cambridge Analytica has so far lodged no financial disclosures, according to regulatory records, suggesting it has not traded in the country despite being established before the federal election in 2016 and several state elections.

While profiling would-be voters and targeting messaging is nothing new, Cambridge Analytica achieved a degree of notoriety after media reports revealed the extent of its data gathering and apparent effectiveness.

"It is scary how accurate the information is you can glean from publicly available data," said Bela Stantic, an IT professor who runs the big data and smart analytics laboratory at Griffith University.

Australian election analysts questioned whether Cambridge Analytica's model, which involves analysing people's voting and party registration history, as well as social media profiles and other data, would work in Australia.

Most Australians do not register for political parties and voting histories are not recorded, while the country's compulsory voting system also weakens the power of campaigns aimed at encouraging - or discouraging - certain demographic groups to vote.

"They might find it useful but still most political professionals in this country would be of the view that campaigns are not about motivating people to vote, it's about banging the same message long enough that those who aren't interested hear it," said Antony Green, election analyst at the ABC.

"I'd be concerned about the intentions and bona fides of a commercial organisation which claimed to have influenced important elections through audience targeting and psychological manipulation," Oliver said.

"That practice, if indeed it could be achieved, would impinge on the proper functioning of a democratic system."