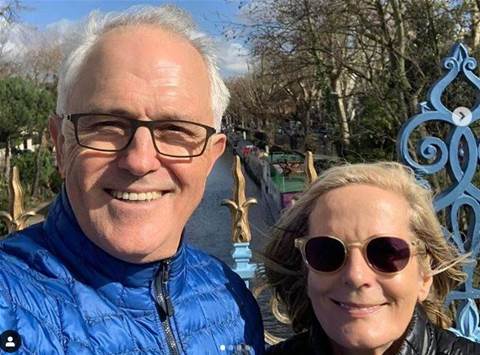 In a spirited defence that set down markers for what Turnbull clearly regards as a key element of his political legacy, the former PM called out his big cyber push, including the creation of a cabinet-level ministry, cyber ambassador, cyber coordinator and attendant strategy in 2016 as a shift to a new strategic footing.

“It is why in one of the final decisions of my government was to ban telecommunications companies which could not meet our security requirements (such as Huawei and ZTE) from providing equipment to our new 5G phone networks, on national security grounds,” Turnbull said in an address to the Henry Jackson Society in London overnight.

“We were the first nation to do so. And we so decided not because another country told us to, let alone for protectionist reasons, but to defend our own sovereignty and to hedge against changing times.”

While Turnbull deliberately pulled-up short of telling other nations in the Five-Eyes intelligence community which way they should swing – the United Kingdom is still weighing its options at both a technical and diplomatic level – he sharply cautioned against acquiescence in terms of dealing with superpowers as a long term strategy.

“At all times, I pursued a China policy which was clear-eyed and as staunchly defending our national interest as China’s leaders defend theirs,” Turnbull said.

“When dealing with super powers, remember they regard deference as their due and gushy sycophancy as weakness. And so our goal in the region has been to ensure that all nations, and especially our own, maintains its sovereignty.”

However there was also a conspicuous effort to counter any impression that Australia’s stand on Huawei merely served as a box trailer to US foreign policy, in particular the increasingly sharp rhetoric of the ascendant cyber and information warfare arms of the US government.

“There is a lazy tendency to view the rise of China through a cold war lens, to see China as the new existential threat, as the Soviet Union was, which must be contained,” Turnbull said, noting that for the Chinese “becoming either the largest or second largest economy in the world” was “simply a return to the natural order of things.”

“China for all of recorded human history has been the largest economy, except for the last two centuries when it became weak, fell technologically behind and was exploited and plundered by foreign nations.

“Every Chinese citizen is determined that will never happen again,” Turnbull observed.

Chief among the plunderers was of course Britain, the same country that is now grappling with how to protect its cyber sovereignty and its ambitions in Asia amid the political turmoil being generated by Brexit.

Ever the history buff, Turnbull indirectly questioned the merits of globalisationist stance that essentially ceded technological advantage to lower-cost economies for an economic sugar hit meted through cheaper hardware.

“In many discussions with my western counterparts, I raised the concern that we, and in particular the Five-Eyes, had got to the point where there were now essentially four leading vendors of 5G systems - two Chinese, Huawei and ZTE, and two European, Ericsson and Nokia,” Turnbull said.

“With the benefit of hindsight it beggars belief that the countries which pioneered wireless technology - the United States, the UK, Germany, Japan and with wifi, Australia have got to the point where none of them are able to present to one of their own telcos a national, or a Five-Eyes, champion in 5G.”

Perhaps it depends on whose belief is being beggared.

Australia once had a communications minister who thought Nokia was a Japanese company and a Prime Minister who cheerily vowed Turnbull could “demolish the NBN” after professing on national TV he was “no Bill Gates.”

Like reality TV, politics is a craft where disbelief, along with belief, is as often suspended as it is beggared.