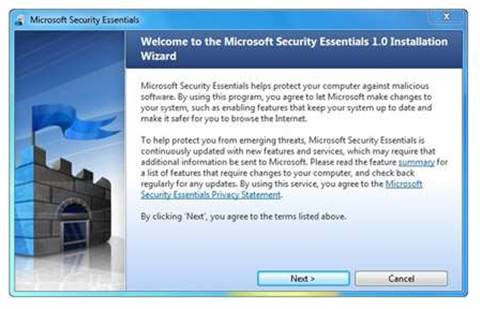 A trojan masquerading as the anti-virus product Microsoft Security Essentials attempts to trick users into installing a rogue security program, according to researchers at anti-virus firm F-Secure.

The fake Microsoft Security Essentials is being distributed via drive-by-download attacks as part of a file called “hotfix.exe” or “mstsc.exe,” Mikko Hypponen, chief research officer at F-Secure, wrote in a blog post.

The malware displays a “Microsoft Security Essentials Alert”, which claims the user's computer is infected with an “Unknown Win32/Trojan” in an attempt to frighten users into downloading rogue AV products.

“[The malware] will try to scare you into purchasing a product you don't need,” he wrote. “Don't fall for it.”

The legitimate Microsoft Security Essentials is a consumer and small business product that defends against viruses, spyware, and other malicious software.

Got a news tip for our journalists? Share it with us anonymously here.
Copyright © SC Magazine, US edition
Tags:
antivirus as disguised found microsoft product security trojan
In Partnership With
By Angela Moscaritolo
Oct 26 2010
2:00PM