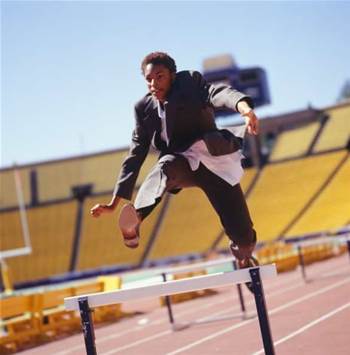 But faces an unhappy ACCC.

TPG inched closer to attaining its hard-fought goal of buying out rival internet service provider iiNet yesterday, but it faces a nerve-wracking wait to learn the deal's regulatory fate.

iiNet and TPG yesterday registered their scheme booklet with the Australian Securities and Investment Commission (ASIC) after an independent reviewer found the $1.56 billion share and cash-based offer to be "fair, reasonable and in the best interests of shareholders".

Lonergan Edwards & Associates made the assessment "in the absence of a superior proposal".

After knocking competitor M2 Group and its $1.6 billion share-based offer out of the running, TPG looks set to - at least as far as the shareholder vote goes - make it through to the finish line.

"M2 was a contender for a while, and from a purely shareholder point of view, iiNet shareholders will be happy that there's a good deal coming out of it," telco analyst Paul Budde told iTnews.

"In that respect there's nothing wrong with the deal. Consolidation has to happen and this is not a bad deal for the shareholders."

But despite making it past the initial hurdles, it's a long way from smooth sailing for the ISP.

Australia's competition watchdog has already indicated it has concerns about the effect the takeover will have on the wider market and customer service.

The ACCC is currently consulting with interested parties after last Thursday revealing it expected the merger - which would create the second largest broadband provider behind Telstra - would substantially lessen competition between ISPs.

The watchdog thinks such a reduction in competition would have a flow-on effect of higher prices and degradation of customer services for end users.

The ACCC is taking submissions until July 2 and has promised to make its final decision by August 20.

It means the companies will face a month-long wait after the shareholder vote takes place on July 27 to learn whether their deal will be allowed to go ahead.

The merger will "absolutely not go ahead in a straightforward way," according to Budde.

"You're caught between a rock and a hard place," he said.

"There is the over-arching competition issue that needs to be resolved, and it's difficult. On one hand we will absolutely see less competition, but on the other the elephant in the room is still Telstra - everybody else dwarfs in comparison to Telstra.

"In order to create more robust competition against Telstra, we need bigger companies rather than smaller ones. But there's the wider competition issue. It's a catch-22."

The deal's effect on not just immediate but future competition in the sector could also come into play, according to Ovum analyst David Kennedy.

"[The ACCC] want companies that have sufficient scale and scope to compete with Telstra. Optus has significantly less broadband connections than the combined TPG/iiNet would have, but it also has a mobile network. Then you've got iiNet and TPG, which have a lot of fixed broadband connections, and what's left?" he said.

"Vodafone, with no fixed business, and M2, which has no mobile and is significantly smaller than the new combined entity.

"So we seem to be headed towards a market dominated by three players - and if you take into account the industry rumours that TPG might be interested in some kind of future stake with Vodafone, that third player looks even more formidable.

"The ACCC would be looking into the long term and asking whether we want a telco market dominated by three main players. That's the question they've got to answer."

Outright no or conditional yes?

Kennedy said history could prove effective in gaining an insight into how the ACCC will act - but noted it was a "mug's game" trying to predict which way the ACCC would go.

"This isn't the first time they've looked at the broadband market - they looked at the proposed takeover of Adam Internet by Telstra a few years ago, and even though that was small, they blocked it," Kennedy said.

"So we know from past action by the ACCC there are limits beyond which they don't really want broadband providers to grow.

"We don't really know where the line is at this point."

Budde said the ACCC will either outright refuse the deal or impose a set of conditions on the pair that will need to be met.

"It's not a straightforward case," he said.

"The fact that they issued a warning is a clear indication they're not happy."

The regulator could impose similar restrictions on the merged entity as it did with Telstra and regulated wholesale access, Kennedy suggested. He doesn't expect the regulator to stop the deal from going ahead entirely.

"Telstra has to provide access to wholesale DSL, and iiNet and TPG combined will have a comparable number of broadband connections to Telstra - not as big, but comparable," he said.

"The ACCC would have to wonder whether it needs to place the same sort of competitive safeguards there.

"The complexion of the market changes quite a lot, and a future iiNet/TPG/Vodafone would be a pretty significant player in the market."

Shareholders can choose between cash or scrip, excluding the special dividend which is to be paid in cash. TPG has capped its share offering at 27.5 million TPG shares.

iiNet today said it would reveal prior to the July 27 meeting the number of shares subject to the share election and whether any scaling would apply to the cap.