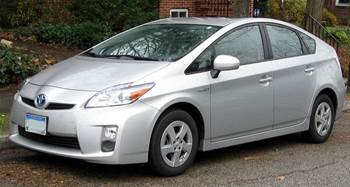 Toyota has issued a recall covering all 1.9 million of its third-generation Prius cars sold worldwide due to a programming glitch in their hybrid system.

About half of the recalls are in Japan and 713,000 in North America, a Toyota spokeswoman said. No accidents have been reported related to the defect.

Toyota said the problem was in the software used to control the boost converter in a module in the hybrid system.

"The setting of the software could cause higher thermal stress in certain transistors within the booster converter, and these transistors could deform or become damaged as a result," Toyota said.

"This will result in various warning lights being illuminated, and will probably cause the vehicle to enter a failsafe mode," it said.

In limited cases, the hybrid system could shut down, causing the vehicle to stop, possibly while it is being driven, Toyota said.

The latest action is the third recall for the current five-year-old Prius.

Toyota issued the previous recall last June for problems related to the brake accumulator. The Prius is one of Toyota's best-selling models, and has become synonymous with the fuel-saving hybrid technology.

It declined to disclose cost estimates for recalls.

The number of vehicles called back for a single defect has ballooned over the years as car makers increasingly use common parts across multiple models to save development and procurement costs.

Since a damaging quality crisis in 2010 that led to the recall of more than 10 million vehicles and marked a turning point in Toyota's 70-year history, automakers in general have become more proactive in addressing safety concerns.

In late 2012, Toyota issued two multi-million-vehicle recalls - including one affecting more than 7.4 million vehicles to fix power window switches that were a potential fire hazard. That was the industry's biggest single recall since Ford took 8 million vehicles off the road in 1996.

Shares in Toyota were up 0.3 percent on Wednesday afternoon, roughly in line with the benchmark Nikkei average.