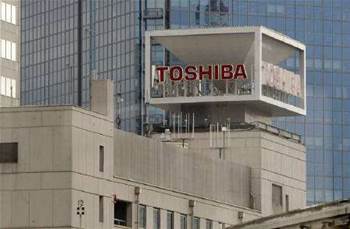 Toshiba is making its foray into the tablet war, offering a 10-inch device it says will be comparable in price to Apple's iPad.

The Toshiba Tablet, which will be available in the first half of 2011 and run Google's forthcoming Honeycomb version of the Android operating system, is targeted at consumers.

Like other touchscreen tablets, it plays high-definition videos and is designed for Web browsing, games and electronic books.

The 1.7-pound tablet, which uses Nvidia's Tegra 2 mobile processor, connects to the Internet over Wi-Fi, but has no built-in capability to connect to high-speed mobile phone networks. It features front and rear-facing cameras, and will have access to an applications store.

Toshiba's tablet will be competitively priced versus the iPad, which starts at US$499, although the company declined to be more specific.

Jeff Barney, general manager of digital products for Toshiba America, made it clear that the tablet is only the company's first.

"We are going to embrace this category, and we are looking to develop a family of tablets," he told Reuters.

Toshiba will show off the tablet this week at the Consumer Electronics Show, an annual trade show held in Las Vegas.

With roughly five percent of the global PC market, Toshiba is one of a host of companies attempting to steal a piece of the emerging tablet market from Apple.

Global tablet sales are expected to explode to more than 50 million in 2011, as rivals including Research in Motion and Hewlett-Packard launch new devices.

Apple, which sold more than 12 million iPads in 2010, according to analysts' estimates, is expected to dominate the market in the near term. Rival tablets that have already launched from companies like Samsung and Dell have not been able to beat Apple on price point.