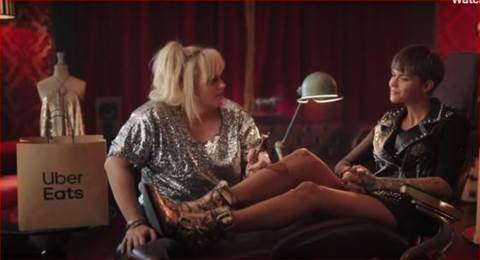 Rebel Wilson, Sophie Monk and Ray Martin might be the light hearted, self-mocking celebrity faces of Uber Eats, but down at the Fair Work Commission the Transport Workers Union is dishing out plenty of curry.

It’s a case that could soon sweat so-called gig-economy operators by forcing them to improve Dickensian work practices that have thousands of foreign students risking their lives on crappy bikes without lights in bus lanes for a few bucks.

The powerful industrial arm of truckies and couriers on Monday doubled down in its legal fight against Uber and Uber Eats, revealing it will appeal a previous unfair dismissal decision that ruled delivery workers were contactors, not employees.

The TWU’s case centres on former Uber Eats delivery Amita Gupta, who lost her job after running 10 minutes late for a delivery. This was despite doing 2200 previous deliveries sometimes earning as little $300 for a 96 hour week.

The case essentially boils down to the level of control Uber Eats has over its delivery people, how onerous that control is in terms of expectations of staff and whether branding yourself a digital or gig company will get you off the IR hook.

It didn’t for Foodora, which packed its bags after losing a case to the union.

A victory against Uber Eats, indeed Uber full stop, is a key ambition for the TWU which is essentially running the cases as a socio-industrial line in the sand rather than for direct member representation.

But the vast bulk of Uber’s drivers and broader food delivery riders don’t have union membership or coverage.

This said, employees with union cover have plenty to lose from what’s loosely called the ‘grub’ economy that keeps lowering the bar.

Restaurants are also becoming weary of the profit dilutive pact they have to make with UberEats.

“We again appeal to the Federal Government to intervene in this case to ensure all workers in Australia have rights. We also appeal to the Government to regulate the gig economy. It cannot be left any longer to individuals to take on these cashed-up Silicon Valley behemoths, dragging them through the courts, Kaine said.

“Gig economy workers must be given rights to guaranteed minimum rates, sick leave, adequate workers’ compensation when they are injured on the job, the right to collectively bargain and the right to challenge an unfair sacking.”

Having architected the counter strike against major platforms, Sheldon also weighed in. “Food delivery companies have a business model based on wage theft and 18th century-style piece work,” Sheldon said.

“Companies that play and pay by the rules should not have to compete against those that exploit their workers.”