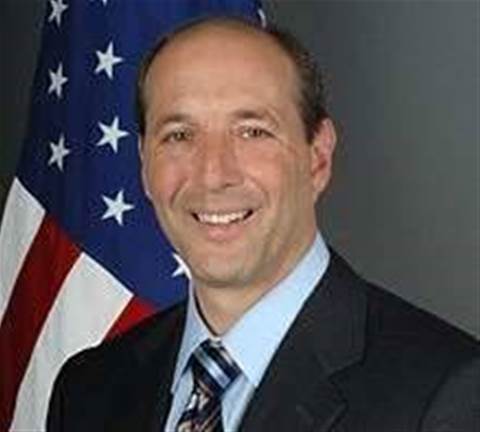 Jeffrey Bleich, US Ambassador to Australia.

Opinion: How the TPP aims to scrap data sovereignty laws.

Whether we know it or not, we all use the global ''cloud'' for many of the critical things we do each day on our computers, tablets and mobile phones.

This cloud, which is a set of powerful servers that can perform global computing services, will increasingly host Australia's and America's future. So now is the critical time to understand and embrace it.

Over the past decade, new technologies have revolutionised the ability of every person on Earth to generate, store, and retrieve unprecedented amounts of data. In fact, more than 90 per cent of all data that exists today was generated in just the past two years, and that pace is accelerating.

By 2015, most data will be in the cloud, where each of us can access it safely and cheaply. Already, just by tapping a few keys, we can Skype with overseas friends, get a satellite picture of a storm heading our way, buy a new iPad, or read the great works of the world's libraries.

And this is only the beginning. Australia, with its high-speed national broadband network, is poised to lead the Asia-Pacific in taking advantage of this next big wave of innovation, as long as we act together now to ensure a healthy cloud atmosphere.

By their nature, cloud services are not bound by borders. A cloud service provider located in Sydney or Silicon Valley has direct, immediate access to more than one billion broadband consumers in any part of the globe.

That is part of why Australia and the United States are both investing in broadband networks and data centres. Combined with the cloud, this sets our nations up for tremendous trade success, compared with nations that rely on older, slower, more expensive, less secure and less capable data systems. So we have a serious stake in ensuring US and Australian firms can use the best cloud services to reach foreign customers.

The biggest obstacle to this bright future is fear that fuels a growing ''cloud protectionism''.

Like people who once thought keeping their money hidden under the mattress was better than having it in a bank, some voices across the region, and even in Australia, have called for limiting the flow of data across borders, and requiring firms to install local data centres in each market to ensure local ''control''. This ''beggar thy neighbour'' protectionism would be just as self-defeating in the digital economy as in every other sector. In Australia, such restrictions would undermine the economic benefits the NBN would deliver by cutting off access to the highest quality, lowest price and most secure cloud services for businesses, government and consumers. While some local providers may get a windfall, everyone else would lose out.

One way to stop cloud protectionism is through the Trans-Pacific Partnership, or TPP. On Wednesday in Auckland, officials from Australia and the US will work with counterparts from nine other Asia-Pacific countries to craft this ambitious new trade agreement that seeks to integrate the economies of the Asia-Pacific.

This is a rare opportunity to set the rules of the road for regional commerce for generations to come.

The US President, Barack Obama, the Prime Minister, Julia Gillard, and other TPP leaders have committed to making this a visionary, state-of-the-art agreement for the 21st century. To achieve this, the rules must provide clear skies for the cloud by ensuring data flows just as freely as goods, services and investment.

Cloud critics usually claim local data centres would somehow be better at protecting sensitive data from foreign hackers or snooping governments. But threats to privacy and security exist throughout cyberspace, regardless of whether data is stored in the global cloud, a server in the office basement or a hard drive on your home computer. Like keeping money under the mattress, keeping data ''at home'' not only deprives you of all the benefits the global cloud offers, but it is probably far less safe as well. What we want is not the best local solution for protecting our sensitive data, but the best global solution. The economies of scale enjoyed by the large cloud service vendors give them the resources and expertise to achieve far higher levels of security than you could with the servers in your IT closet. The TPP, moreover, gives us the chance to develop a common approach to protecting privacy that would serve well companies and consumers in TPP nations.

Together, the US and Australia can lead in this 21st century digital economy, and there is no better opportunity for doing so than adopting a TPP that reflects reality, and by dispelling unfounded fears so we can enjoy the full benefits of the cloud.

Jeffrey Bleich is the US ambassador to Australia. This OpEd was re-published, with permission, after appearing in the Sydney Morning Herald's National Times.