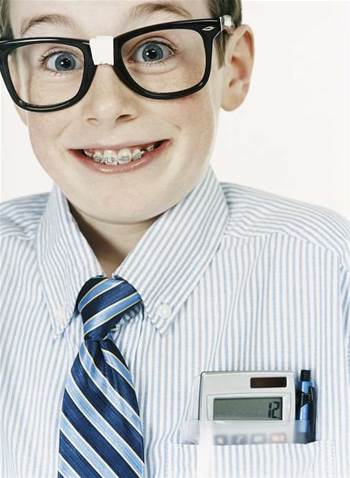 Behind every great technology there’s almost always a great geek, the men and women whose vision and invention helped create the world and its technology as we know it.

Often unsung and underappreciated, their own personalities or lifestyles usually keep them from gaining greater public recognition.

You won't find any smooth-talking chief executives or business masterminds who built computing empires on this list (that comes next week). These people are the geek's geeks. They are the truly magnificent eggheads that worked their magic on the most basic levels, from invention and development to silicon and command lines.

With so many great minds to choose from, it was all but impossible to narrow this list down to ten but after considerable argument we’re managed it, nearly. So at the end you’ll find a couple of honourable mentions – it was either that or a fight would have broken out.

Shaun Nichols: It's one thing to write a complete computer program. It takes an entirely different level of geekdom to write a computer operating system. Compound that with the fact that said operating system is a re-write of the most successful network operating environment of all time, and then - as the icing on the cake - giving the code away to the rest of the world for free and you'll start to understand why Linus Torvalds earned the number one spot.

One story jokingly tossed around is that Torvalds wrote all of the code for the Linux kernel on the back of a shovel over the course of one cold Finish winter. The reality is only slightly less amazing: the 21 year-old student wrote the first versions of his Unix clone in his spare time as a way to connect with servers at the University of Helsinki in 1991.

Over the next seventeen years, Linux developed into one of the most popular operating systems in the world, both for enterprise server and client computing. Many people interact with Linux machines on a daily basis without even knowing it.

Perhaps even more important, Linux provided the spark which ignited the developing open-source software movement, which has now redefined the idea of distribution and arguably helped form the basis of collaborative principles on the web which would later become social networking and hosted collaboration tools.

Though Linux now has thousands of developers, Torvalds remains its ultimate guardian, keeping in the direction of the kernel's development. He remains revered in nearly every circle of the computing world, from servers to clients to IT infrastructure and management, Linus Torvalds reigns supreme in today's order of geeks.

Iain Thomson: In many years of travelling to Finland I have come to love the place, and Torvalds exemplifies why. It’s a nation of bloody minded individuals who recognise that while this is good up to a point then working together is also essential.

Coupled with this there is a distain for the material lifestyle in that great country. Had Torvalds been raised in America he might very well be a billionaire but instead he lives modestly and takes his wealth in knowing he has changed the computing landscape for ever.

Torvalds was always going to be in our top three but for consistent and long term brilliance we decided he had to get the top spot. We have yet to see the full effect of Torvalds’ invention on the computing sphere but it’s going to be fun watching it develop.

Shaun Nichols: It can be argued that nobody did more to bring about the advent of home computing than Apple. While Steve Jobs was the marketing mastermind who brought the whole thing about, Woz was the engineering muscle who developed the company's first products.

Back in the mid-70's, there really was no such thing as a home computer. While a terminal could be installed in a house, there wasn't much of a reason. Wozniak changed that by developing a machine that was easy to understand, use and most importantly, was cheap to build and buy.

Not only did Woz design and build the first Apple computer, he also wrote the operating system for the company's machines until the early 80s – by hand with pencil and paper.

But the real geek appeal of Woz is that, despite it all, he hasn't lost touch with his roots. He still has the air of a guy who stays up all night watching Red Dwarf and hacking out code just for the hell of it. Woz enjoys Segway polo and he's even shown up in line for Apple's iPhone releases.

Whether you're an Apple fanboy or a Mac-hater, you have to love Woz. Truly, the man is the people's geek.

Iain Thomson: I may not be Apple’s biggest fan but Woz is a legend and deserves the number two spot. He’s a painfully shy man still, with only a deep love and understanding for technology. As he himself has said, if he hadn’t met Steve Jobs he’d probably be living alone, with a small cubicle at HP where he would craft elegant devices and code.

He is still for many the king geek but if you look at how long he actually stayed in business his effect over the last few decades has been relatively minimal, as he has devoted himself to teaching and other projects. Nevertheless, the man is a giant in a world of technological pigmies.

Iain Thomson: It is not an exaggeration to say that if it wasn’t for Berners-Lee you might not be reading this article.

Berners-Lee, while at CERN, developed the basic protocols of the World Wide Web, initially just for internal use. But when the brilliance of the invention became clear he devoted his life to its growth and spread, even if he did make a few mistakes along the way (see Geek 5).

Had he patented his invention Berners-Lee would probably have wealth equalling that of a small country. Instead he gave it away, recognising that profiting from something like this would inhibit the growth of a technology that had the potential to revolutionise human affairs.

Some younger readers may not remember a world without the internet but those of us who do recognise the enormous changes it has wrought. The world would be a poorer place, both intellectually and financially, without it.

He’s still active in nurturing his invention, against internet monitoring by ISPs and a of net neutrality. He’s also working on the next generation of the internet, the semantic web.

Shaun Nichols: Sometimes it can be hard to comprehend the scale to which certain technologies can influence the world. The tens of billions of dollars in commerce which stemmed from Berners-Lee's work is simply mind-blowing.

It's also a testament to the work done by CERN and its benefits to the rest of society. Had it not been for the LHC, most people would not have the slightest clue about the organization and what it has done.

Shaun Nichols: Perhaps nobody was more influential in the advent of supercomputing than Seymour Cray. From ERA to Control Data Corporation to Cray Research, his designs became the backbone systems of laboratories like Livermore and Los Alamos. Many of his innovations became basic concepts for supercomputer design.

Legend has it that at the age of ten, Cray used an erector set to construct a Morse decoding tool. Later in his life, Cray spent his free time redesigning the logic circuits for his computing systems.

Iain Thomson: Cray is similar to many on this list in that he was never happy at the head of the company. The true geek never is, because there’s so much to distract you from the really important stuff – doing it better than anyone else.

Although his machines were often seen as the backbone of the military/industrial complex they were more often used for good. We would be lacking many great medical treatments and materials, or even unaware of the changing climate, without his machines.

As an unassuming computer student he learned of Berners-Lee’s invention and decided to design a browser that would make the internet easier for people to use. This led to a brief conflict with Berners-Lee, who was peeved that Andreessen had included the ability to view pictures online, as he thought it should be for text only.

Mosaic was developed into the Netscape Navigator browser and for years was the de facto application for accessing the internet. It so terrified Microsoft that Redmond was forced into a dirty war against it that would later see the software giant fined hundreds of millions of dollars.

Since the crushing of Netscape Andreessen has devoted himself to a series of new start-ups, each with a good idea, and each bought up by other companies. He lives the life of the itinerant geek, but his name on a speaker’s list will bring admirers by the thousand.

Shaun Nichols: Andreeson may be considered one of the more successful geeks on this list, even despite getting run out of town by The Borg.

He more than most truly seems to embrace and appreciate his position, and he's not afraid of a good spot of publicity. Marc Andreeson is that rare mixture of computer geek ingenuity and CEO ambition. Unlike others on this list, he has not only a knack for developing great products, he also has the ability to turn them into a solid business plan… for the most part.

Next Page 1 2 Single page
Got a news tip for our journalists? Share it with us anonymously here.
Copyright ©v3.co.uk
Tags:
10allgeeksgreatestofsoftwarethetimetop