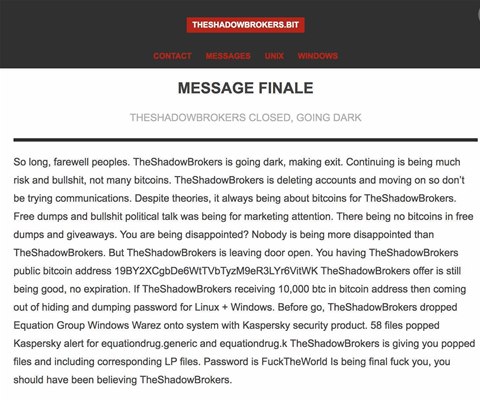 The hacking group thought to have taken a cache of network and system intrusion tools from an attack squad linked to the US National Security Agency (NSA) say they are giving up after failing to auction off the stolen software.

In August last year, The Shadow Brokers put up code that they said were samples of hacking tools collected and developed by the Equation Group attack squad.

The hackers wanted one million Bitcoin for the exploits, many of which were confirmed as genuine by Cisco and security vendors.

But no bidders have been found by the Shadow Brokers, and the group said it is now deleting its accounts and exiting the stage.

The group did however say it was "leaving door open" and published its public Bitcoin address, offering to provide passwords for the Linux and Windows exploits in the archive of hacking tools for 10,000 Bitcoin (approximately $10.8 million).

The group also released, for free, 58 Windows exploits as part of their exit. These are detectable with the current version of Kaspersky Antivirus.

The identity of the Shadow Brokers remains a mystery. While a former Booz Allen Hamilton contractor Harold Thomas Martin was suspected of being linked to the group after he was arrested for taking some 50 terabytes of information from the NSA in August last year, no conclusive evidence has been presented.