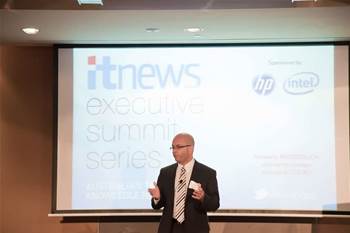 Organisations developing policies that allow staff to bring their own device to the workplace are unlikely to lower IT costs, according to speakers at iTnews' first Executive Summit in Sydney.

In its simplest form, BYOD policies allow employees to bring their own computing device (laptop, tablet, smartphone) to the workplace to gain access to corporate tools such as email and calendar and potentially internal applications and file shares.

These programs have developed in the wake of powerful new mobile form factors (such as tablet computing) being driven from the consumer market into the corporate workspace.

Some BYOD programs offer employees a stipend to buy their own device, rather than the IT department provisioning an organisation-wide standard. This trend has taken off in the United States in particular: a recent study by Aruba Networks showed that 85 percent of healthcare organisations support such a policy (pdf).

But speakers at the iTnews Executive Summit in Sydney said that any savings from not having to provision new devices will well and truly be negated by new management overheads.

In Australia, there is a demand for BYOD that defies rationality on the part of employees, according to Gartner analyst, Robin Simpson.

“How badly do employees want to bring these devices? Often, in my experience, they want to do it badly and they will pay for it themselves,” Simpson told delegates.

Australian businesses paying employees a stipend for buying devices are subject to paying Fringe Benefits Tax, he noted, as they would for funding an employee's vehicle.

Simpson also noted that connecting to corporate applications from a larger range of devices might attract additional software license fees.

Suncorp chief technology architect Ross Windsor told delegates that a bigger concern was covering maintenance and the capacity for workers to remain productive if they lose or break the device.

“If we give employees cash to go and buy a device, what happens if they don’t have maintenance on it?

Suncorp - which offers staff virtual desktops and corporate-provisioned mobiles - has devised a carefully crafted user agreement for BYO Devices to cover off some of these risks.

“There are OH&S regulations and guidelines [In Australia] around how long you can work on a mobile device,” said Windsor.

“You could potentially have an employee litigate against you for not having a safe work place. So things like OH&S requirements have to build in to a robust policy around your BYO computing.”

Windsor said Suncorp employees must accept certain guidelines - such as agreeing not work on the device for more than two hours at a time - before they are allowed access the bank’s online self-service portal with their own device.