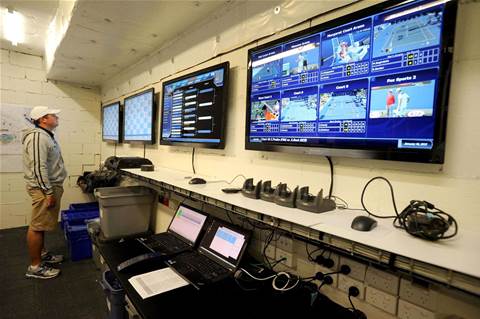 On disaster watch for Open.

Tennis Australia has exposed match analytics for the Australian Open to the public for the first time, allowing onlookers to dig into the same statistics made available to coaches, players and sports journalists.

Served from IBM's US-based private cloud, the updated SlamTracker web application pulls together 39 million points of data collated from all four Grand Slam tournaments over the past seven years to provide insights into a player's style of play and progress.

The analytics application also provides a player's likelihood of beating their opponent through each round of the two-week tournament and the 'key to the match' required for them to win.

"We gave our data to IBM, said, 'Here we go, that's 10 years of scores and stats, matches and players'," said Samir Mahir, CIO at Tennis Australia.

"We're in the business of high performance which means that we need data to analyse our players' game."

The application made available on the Australian Open website is similar to that offered to sports journalists in the tournament media room, though the latter also has the ability to index each of the 38,000 data points recorded each game with the video replay.

Making analytics more useful for fans and other stakeholders has become a major focus for Mahir since coming into the CIO role at Tennis Australia in June last year.

It is his second bout managing IT for a large-scale tennis event however, having accomplished a similar role as IT director of the US Tennis Association during the late 1990s.

He told iTnews the focus on technology at such events had changed significantly in the intervening years, with a much heavier impetus on real-time data and infrastructure reliability.

"All aspects of running an event, from ticketing, merchandising, transport, accreditation, rely on technology," he said.

Since last year's tournament, the association has bolstered its infrastructure, moving from 23 to 35 kilometres of cabling between multiple arenas hosting the event in Melbourne and upgrading the servers used on-site.

The association also boosted its disaster recovery capabilities in the lead-up to the Australian Open in IBM's private cloud deployment, drawing on experiences from the most recent US Open, which was ravaged by Hurricane Irene days before it started.

Patrick Childress, program manager in IBM's real-time events team said the hurricane barred the US Open's IT team from working on-site until 6pm the day before the tournament was set to begin.

Within three hours of re-entering the facility, the team had managed to re-configure applications and web servers based in IBM's private cloud for live capability at 11am the first tournament day.

Disaster recovery, the tournament's website and the SlamTracker application rely primarily on IBM's three data farms in central and eastern US as well as a content delivery network for local caching.

Much of the infrastructure was put in place at the grounds from last December by an internal IT team of 30 - double its normal size - and an aided workforce of 45 on-site IBM contractors.

Other services previously trialled in-house, such as a free public wi-fi network for tournament patrons, has since been outsourced to Optus.