Telstra: We are not an IT services company 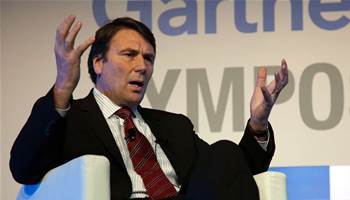 Telstra chief executive David Thodey has ruled out expanding the carrier's operations into the provision of IT services, telling analysts at the Gartner Symposium in Sydney today that he would rather the company stick to its knitting.

“Show me a communication services provider that makes money out of an IT service," he told attendees. "They’d say ‘I’ll come back to you’.

"And if you can’t make money out of something you’re probably not giving a good service to your customers," he said.

It is widely assumed that telecommunications carriers - particularly large incumbents - were best placed to offer cloud computing services such as infrastructure or software as a service, being that they own both large networks and data centres.

But Thodey said today that all companies need to "understand what you do, and do it well."

He said that that Telstra's core business was its fixed line network and NextG wireless service.

Gartner analysts said the number one question outsourcing companies wanted to ask Thodey is whether Telstra would partner with them to offer cloud services.

“What is Telstra’s strategy for cloud services and are they going to partner,” a Gartner analyst asked.

“It’s still early days,” Thodey said. “We do have partnerships with a number of hardware and software vendors who we’ve chosen.

Thodey said Telstra was "just feeling" its way through such opportunities.