Telstra to build teleports for OneWeb 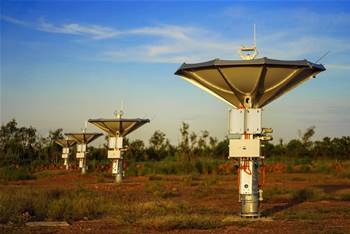 Telstra will build and maintain teleports in the Darwin suburb of Tivendale, and later in the Toowoomba suburb of Charlton and Wangara in Perth.

The Darwin teleport is due to go live in July, with the other two due later in 2022. Telstra told iTnews construction of the Darwin ground station is complete with 14 antennas in place.

"The only remaining works are on the OneWeb side to make site ready for operations", a Telstra spokesperson said.

OneWeb said each facility will provide ground station support for its satellite fleet.

Once the teleports are built, Telstra will provide ongoing monitoring and quality assurance services at each location.

Telstra America’s VP for wholesale and satellite Vish Vishwanathan said: “teleports are complex sites involving access to secure and resilient infrastructure and on-the-ground expertise, which Telstra has provided to OneWeb throughout this project.”

OneWeb noted that its constellation of satellites need both terrestrial and subsea fibre assets, IP backbones and data centres, and having Telstra provide these minimises its cost of entry into this market.

Currently, the two-thirds of OneWeb’s constellation so far launched provides coverage above the 50th parallel North, providing services in Alaska, Canada and the wider Arctic region.

Its launch program was interrupted by Russia’s invasion of Ukraine.

The subsequent dispute between Roscosmos and OneWeb resulted in the termination of their launch arrangements.

The two parties have not yet announced when their first launch will happen.

In December last year, OneWeb appointed Vocus as its first distributor in Australia. Vocus said the LEO services would improve service speeds in remote locations such as mines.