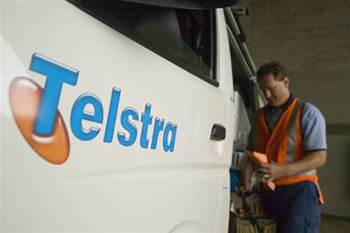 Telstra has begun discussions with mobile reseller carriers in hopes of opening its Next G network for wholesale opportunities early next year.

The move potentially ended years of speculation as to when the telco would open its HSPA network, first installed in 2006, to mobile virtual network operators (MVNOs).

Sources have told iTnews of approaches made by Telstra to canvas support for the venture, where it had previously waited for operators to approach it on the possibility of MVNO access.

MVNO products on Next G were likely to emerge early next year, sources said.

Telstra was contemplating the types of services to be offered to resellers, such as whether services would be pre- or post-paid.

The back-end infrastructure required, such as billing systems, would not be a problem, sources said.

A Telstra spokeman refused to confirm or deny the move, reiterating the telco's known interest in the MVNO space.

"We have always said that we would consider wholesaling Next G if it was commercially viable to do so," the spokesman said.

One source suggested Telstra could open up its existing HSPA-capable Next G network once the migrations to Long Term Evolution (LTE) technology was more fully in place.

The wholesale offering would effectively become a "lite" version of Telstra's network, providing lower price offerings without the higher bandwidth or greater capacity of the telco's LTE product.

Telstra had already begun deploying the LTE mobile network, which would also be marketed under the Next G branding, with plans to make it commercially available by the end of the year.

The carrier was refarming existing 1800 MHz spectrum for the network, rather than waiting to purchase parts of the 700 MHz spectrum in the digital dividend, slated for auction by government in 2013.

The telco has pushed the LTE deployment as a network capacity upgrade that helped it maintain integrity under the weight of rapid subscriber growth, rather than necessarily offering greater speeds.

Telstra executive director of networks Mike Wright told ZDNet last month that, despite taking on 919,000 new mobile customers in the first half of the 2011 financial year, the Next G network was still coping.

"Having swallowed such a large number of new customers, the network on a whole is still performing very well, but you occasionally get a little bit of indigestion and what we're doing is responding as quickly as we can, as we see any of these individual spots pop up," he said at the time.

Ovum telecommunications analyst Nicole McCormick said a move to wholesale the Next G network would allow Telstra to provide its mobile services - traditionally seen as a premium service at a higher cost - to different niche markets.

"Operator networks around the globe are facing increasingly heavy data demands and as such, I suspect, some operators are thinking twice about whether they can realistically take on MVNOs or not," she said.

"In Telstra's case, it would be ensuring that any MVNO deal it inks does not erode [Telstra's] own speed or service quality.

"After premium big data users migrate to Telstra's new LTE network, it may be easier for Telstra to take on MVNOs on the Next G network."

Telstra has previously held an "open door" attitude to wholesaling its mobile network, a large proportion of which it relinquished when it shut down its CDMA network in 2008.

It continues to wholesale its second-generation GSM network to carriers for mobile voice roaming with the number of subscribers on reseller networks climbing to approximately 80,000 during the first half of the 2011 financial year.

The company has also begun concluding contracts with Vodafone Hutchison Australia around the 3GIS 2100 MHz joint venture network, which provided 3G access over the spectrum to both Telstra and 3 Mobile customers. It was expected to conclude that process in 2012.