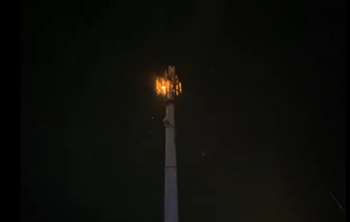 Pummelled by rain, decimated by floods and enraged by ineffective government support during a time of social and environmental crisis, the bucolic town of Mullumbimby, part of the Byron Bay Shire, has now suffered another total mobile communications outage following a 3am fire at its Telstra tower.

Telstra Regional general manager Mike Marom, this morning confirmed that the fire appeared to have been deliberately lit and described the act as ‘reprehensible’.

NSW Police and Telstra are investigating the blaze at the tower on River Terrace, Mullumbimby, which has caused extensive damage to the top of the tower and destroyed antennas, transmitters and receivers.

“At a time like this, when communications are so crucial to flood recovery, to have our mobile site damaged and critical telecommunications taken out is reprehensible.

“What is already a difficult time for Mullumbimby has been made that much harder by what we suspect is an unnecessary, dangerous and selfish act of vandalism,” Marom said.

The tower has been a lightning rod for controversy, with anti-5G protestors guarding and monitoring the tower and its upgrades to 5G over the last year.

Telstra confirmed to iTnews that the tower was fully upgraded to 5G only last weekend.

The Telstra infrastructure is the carrier’s only mobile base station in the Mullumbimby area, and it services over 3600 people, many in remote properties.

There is currently no mobile coverage into Greater Mullumbimby, with no definite indication of when services can be restored, and outages in neighbouring South Golden Beach have also been reported.

During the first and most critical week of the floods in early March, Greater Mullumbimby lost all mobile connectivity including access to 000.

“We have crews on site this morning to assess the damage and work out how we can bring connectivity back to Mullumbimby as quickly as possible. It could take several days to bring mobile connectivity – in some form – back to the town,” Marom added.

“We’re having to balance the need for mobile connectivity in a number of places at the same time,” Marom said.

“Telstra has always been transparent about the need to not only bring services back online in the immediate aftermath of the floods but also the overwhelming need to upgrade services in Mullumbimby, and the recently completed 4G and 5G upgrade works meant the site was operating better than it ever had before.”

Member for Richmond Justine Elliot labelled the incident an act of bastardry, at a time when the vulnerability of the regional communications networks and redundancy infrastructure was clearly apparent.

“I am disgusted at the deliberate burning of a Telstra tower in Mullumbimby,” she said.

“We have just seen the effects of a lack of communication through an emergency - when people couldn't use their phones and were stranded without rescue.”

“This deplorable act by criminals has further crippled our infrastructure when our community has suffered so much from the flood.”

Earlier this week, the state opposition called for an inquiry into the emergency response and the failures of the various communications networks, following visits from NSW Labor Opposition Leader Chris Minns and Shadow Minister for Housing and Homelessness, Jason Clare.

“How dare you. This places lives at risk and will significantly set back our recovery. To the people who committed this act of bastardry: you are a disgrace to our community. Shame on you,” Elliot said.

The local anti- mobile community activist cabal, Northern Rivers for Safe Technology, has made public claims that Australian Defence Force personnel, which were dispatched during the flood disaster relief effort last week, helped upgrade the Dalley St tower to 5G. These claims have not been substantiated.

In a statement on their Facebook page, the group reported the fire, stating, “just for the record (again) we do not promote any vandalism. We promote awareness and education around the insidious nature of this surveillance tech that is proven to harm biological life.”