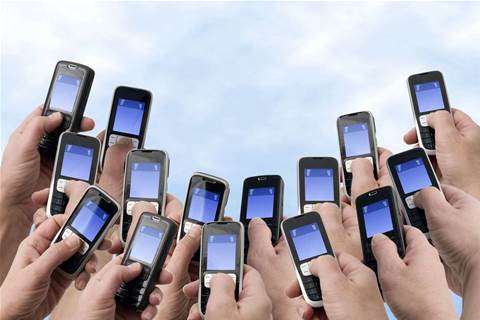 Telstra is looking to data traffic growth — and increased data prices — as a means of arresting revenue decline in a contracting mobile market.

Bray said that while there was movement towards data usage, customers were using less mobile voice and SMS services.

He attributed the latter to the rise of “over the top” (OTT) apps such as Apple’s iMessage and the popular WhatsApp.

Both provide rich communications over a data connection, allowing customers to forgo SMS use.

“Customers have an economic incentive to use over the top,” he said.

However Telstra is looking to fight back, with the addition of mobile plans offering unlimited SMS.

Bray indicated Telstra would also look to build its own rich communication suite (RCS). However, he did not provide a timeline for this development.

Telstra is also investigating the introduction of shared data plans, which are popular overseas. A shared data plan would allow customers to have a single data allowance spread over multiple Telstra devices.

Bray said the company is actively pushing its highest level data consumers onto the new network.

“Customer satisfaction for 4G is very high,” he said. “Moving customers onto 4G also allows more headroom for customers who remain on the 3G network.”

Telstra chief executive officer David Thodey told investors it would spend "$1.2 billion on 4G in 2013, with the goal of covering 66 percent of the population by the middle of the year”.

Bray also reported Telstra is now the number one prepaid provider, up from number three a year ago.

Despite the strong growth in prepaid, postpaid contracts are now outstripping it.

“Our hypothesis is that customers want the rich functionality of a smartphone, and those phones are available on postpaid plans.”

He explained that a focus on profit, to the exclusion of everything else, would not create long-term value.

“It’s a matter of, being a telco, where you play in the value chain of providing those services,” he said.

Telstra has also moved to improve customer service by realigning its internal culture, and through big data technologies that could allow it to better understand consumer demands.

Meanwhile, a business simplification program aimed to prune product lines and create a system where every possible customer query could be answered through self service over the internet.

Thodey also noted the transformation of the Sensis business, from being the Yellow Pages company to one supporting the marketing needs of small and medium sized enterprise.

Sensis, however, remains a long-term project for the company, with the business showing a double digit decline in recent times.

Thodey said he couldn’t really see any significant risks in the company’s future. “It’s about risk and opportunity,” he said, “and I am focussed on moving the business forward.”

Updated at 4.45pm to include more details from David Thodey's presentation.