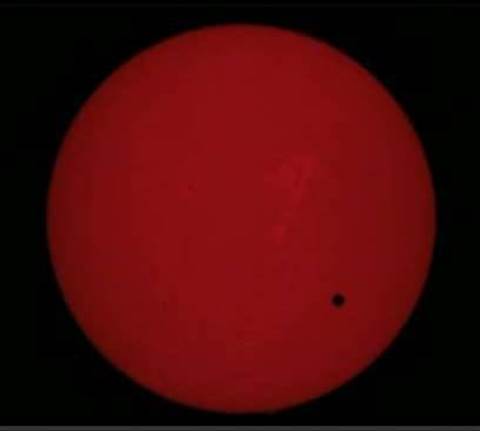 Updated: Blamed on 'IT issue', not cut fibre.

NASA's difficulties with receiving a live stream of the transit of Venus from Alice Springs earlier today have been attributed to an "IT issue", not the cut of a major fibre optic transit cable.

iTnews reported earlier today that the astronomical event had been impacted by the severing of a fibre optic transit cable by road workers outside of Mataranka, a bit over 1000 kilometres to the north of Alice Springs.

A spokeswoman for cable owner, Telstra, initially told iTnews that the cable cut had impacted the ADSL connection of the stream host, Centralian Middle School in Alice Springs, forcing the school to seek an alternative satellite connection out to the internet.

However, Telstra's spokeswoman has since advised the initial assessment was incorrect and that the streaming problem was unrelated to the transit fibre cut.

The NASA stream and Telstra cable had been restored, allowing both sides to investigate the root cause, she said.

"Now that we've got everything restored we've been able to look back [at what happened]," she said.

She said that Telstra initially shouldered responsibility for the NASA stream due to the likelihood that the fibre cut was responsible.

"We [couldn't] say [at the time], 'Well it's not affecting that [streaming] service," she said.

"It's far easier to acknowledge that in all likelihood it is, but focus on the restoration side, which is exactly what we've done."

NASA regained the live feed from Alice Springs just before midday AEST. The feed was broadcast by the space agency to viewers globally.

The transit of Venus – where the planet passes between the Earth and the Sun – was billed as a once-in-a-lifetime event. The next transit event is not until December 11, 2117.

The fibre optic cable cut occurred on a major transit route through the Northern Territory, affecting some mobile and fixed telecommunications services in the territory.

Some of the impacted traffic had been shifted onto diverse transit routes.

Edited at 5.30pm: This story originally indicated that Telstra's cable cut was responsible for NASA's live streaming issues, on Telstra's advice. It has been updated in accordance with the telco's latest assessment.