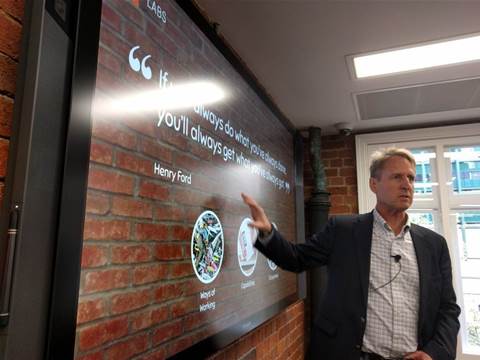 CTO to lead the charge.

Telstra has centralised its product and technology development activities under a new 'Labs' business led by the CTO and aimed at providing a breeding ground for experimentation and implementation of new ideas.

It encompasses Telstra's innovation and product development capabilities, its muru-D start-up incubator - which has now expanded to Melbourne - and a new internet of things lab located within the telco's Melbourne Gurrowa co-creation innovation lab.

Condensing Telstra's innovation and technology development functions into a single entity will allow for "rapid experimentation, validation and the implementation of new ideas within Telstra and with our partners and customers," the telco said.

The new IoT lab will enable anyone to test and prototype internet of things solutions. It is equipped with kit like drones, wearable technology, a 3D printer, electronics testing equipment, diagnostic tools, and fully functional Cat-M1 and NB-IoT radio networks.

It will be free for Telstra partners, while others will need to pay an undisclosed fee to cover the costs of providing the service.

“This is the first lab of its kind in Australia and it means that anyone from university students, to a start-up, to a multinational company can come here and work with some of the best equipment and minds in the business to bring their IoT solution to life,” Eriksson said.

The Telstra CTO team will have several IoT demonstrations permanently running in the lab, and will showcase IoT projects from Telstra partners like Microsoft and IBM, who are building connected facilities solutions.

Currently the CTO team is showcasing an intelligent monitoring prototype for agriculture and smart cities clients, as well as vehicle-to-vehicle and infrastructure communications, where Telstra worked with Codha Wireless to enable vehicles to communicate with traffic lights, such as for green light priority.

Locating the muru-D start-up facility inside Telstra labs means there is the opportunity for those testing solutions in the IoT lab to potentially shift over into the incubator, and for start-ups to test their products with the lab equipment, Telstra said.