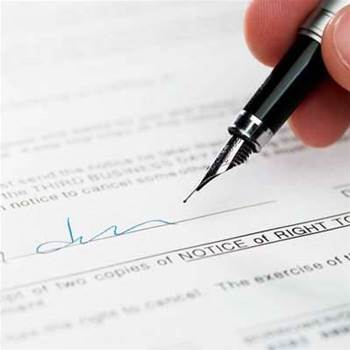 Telcos had until midnight tonight to submit a new version of a voluntary graduated warning scheme for copyright infringers to the Australian Communications and Media Authority (ACMA).

Last year the federal government gave rights holders and the telco industry four months to come up with a scheme for self-regulation of copyright infringement or have one enforced on them.

The Communications Alliance received 370 public comments to the first version of code, which led to changes that over the weekend and today were approved by a working group of telcos as well as the Comms Alliance's board, before going to the ACMA for approval.

The code [pdf], if approved, would apply to around 70 of Australia's biggest internet service providers - or all ISPs that provide residential fixed internet services to more than 1000 account holders.

The latest version of the code has not changed greatly from the first iteration: it still centres around an escalating notice scheme for fixed-line residential users who rights holders claim have infringed copyright.

An end-user alleged to have engaged in copyright infringement will first receive an education notice outlining the alleged infringement and how to access legitimate content; a secondary warning notice; and a final notice warning of potential court proceeedings.

The code focuses more on public education than explicit sanctions, but does allow rights holders to request the assistance of ISPs to take legal action against persistent infringers.

Any account holder who receives more than three warnings in a year can also have the allegations independently reviewed.

Industry body the Communications Alliance has removed a proposed $25 fee that it had initially proposed be imposed on individual internet users who choose to challenge a notice and get it independently reviewed.

The new version also gives stronger consumer representation powers to the copyright information panel (CIP), which will be created to oversee the scheme.

The issue of responsibility for cost has remained undetailed in today's document.

Comms Alliance CEO John Stanton told iTnews earlier this week a commercial agreement had been drafted but would likely not be made public.

“There are still some commercial details, including elements of the scheme funding arrangements, to be finalised and the finished product must meet the approval of the ACMA, but all stakeholders believe that the code can be an important tool toward the shared objective of reducing online copyright infringement in Australia,” he said in a statement today.

The code will allow for up to 200,000 notices to be processed and sent by ISPs to account holders each year the code is in operation.

It states there has been a "commercial agreement" negotiated between ISPs and rights holders.

"Any funding arrangements must be designed to ensure that smaller ISPs are not unduly burdened by the requirements of the scheme," the code states.

The industry has previously tentatively estimated the cost of the scheme to be upwards of $30 per IP address - a figure disputed by rights holders.

The effectiveness of the code will be independently evaluated 18 months after its commencement.

Today's arrival of the final version of the code comes just a day after the owner of the film Dallas Buyers Club succeeded in its legal bid to force ISP iiNet to hand over the customer details of 4700 people it claimed shared its film online unlawfully.

The scheme is scheduled to start on 1 September this year or earlier if all parties are ready.