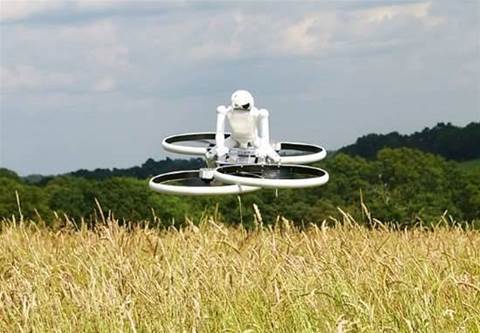 [Opinion] What Google, Amazon could learn from nature.

Our future promises a sky full of drones delivering anything from fast-food to important documents, medical supplies or just a surprise gift for someone special. But how will we stop them all colliding with each other and any other obstacles on their journey?

Google has been experimenting with such delivery methods with test flights this year in Queensland’s Darling Downs. The online store Amazon is lobbying the Federal Aviation Administration for permission to continue testing its Prime Air autonomous flying machines to deliver packages to customers within 30 minutes.

If all the testing proves a success it won’t be long before these autonomous aircraft take to the skies. So for lessons in how to fly, why not look to nature for some guidance solutions?

Help from the bird brain

Birds have a remarkable ability to fly through complex environments with incredible speed, rarely colliding. You only have to see how they rapidly fly through thick forests to appreciate how their minds and bodies work.

This was the inspiration behind studying choices made by budgerigars in flight. We have already studied how individual budgies display favouritism for one foot over the other, or what direction they take to land on a perch.

We have also sent budgies down a tunnel, where they were met by an obstruction in the middle, with a choice to fly either to the left or to the right of it. What we found surprised us.

This was puzzling as we expected the birds to always fly through the wider passage, which would be safer. Even if the birds had a preference for one side when both passages were equally wide, we expected most of the birds to have the same bias – in just the way most humans prefer to use their right hand.

With birds, neither of these was the case.

Try a flock of budgies

In order to try to understand and explain this behaviour, we developed a mathematical model of a scenario in which a flock of birds encounters an environment that offers two passages of flight. This would be very inefficient because the left-hand passage would never be used, even if it happened to be the wider one.

Our mathematical model reveals that the budgerigars may have evolved a clever tactic that expedites the passage of the entire flock. When different individuals are endowed with different biases (left or right), and with different degrees of bias, it turns out that the number of individuals that choose each passage will be proportional to the width of the passage.

So the wider passage will attract more birds and the narrower passage fewer birds, ensuring that both passages are utilised equally effectively, allowing the flock to pass through very quickly.

What is yet to be done is to examine how a real flock of budgies behaves when confronted with a choice of two apertures – so far, the birds have only been tested one at a time, and so we do not know whether or how interactions between individuals will affect performance. This is a subject for future study.

Think of the wingspan

There is also the question of how birds handle situations where the aperture is smaller than the wingspan of the bird. For this purpose we trained birds to fly through a vertically oriented gap of variable width. When the gap was wider than the birds wingspan, the bird passed through it without interrupting its normal wing beat cycle. But when traversing narrower gaps, the bird would interrupt its wing beat cycle by raising its wings or tucking them against the body, to reduce its width to that of its body, allowing collision-free passage through the gap.

Interestingly, birds proved to be much less cautious when flying through these gaps than humans. In comparable experiments, people were much more careful when walking through doors, rotating their shoulders when the passage was 130 percent the size of their shoulder width.

Birds, on the other hand, were much more precise at estimating the size of the gap and only interrupted their normal wing beat cycle when the gap was narrower than 106 percent of their wingspan.

This is particularly interesting because, unlike humans, birds with their laterally placed eyes cannot use stereo-information to precisely estimate distances and must rely on other information.

Back to the deliveries

Although interesting from a behavioural point of view, this also has the potential for helping the design of navigation and guidance systems for autonomous drones – especially when you have a flock of delivery drones.

As we edge closer towards fully autonomous aircraft that are able to fly completely without any human interference, understanding these interactions, and whether to endow them with in-built individual biases for directional choice, will become ever more important to consider in designing and developing fleets of automated aircraft.

When trying to avoid obstacles such as a storm front, it wouldn’t be enough for a computer to simply say “we’ll all go through the wider passage” because that could quickly become very crowded and dangerous, so we will need something much more sophisticated.

It’s a tantalising prospect – what the humble budgerigar does naturally could have wide-reaching implications in our future lives.

Mandyam Srinivasan is a Professor of Visual Neuroscience and Robotics at The University of Queensland.

She currently receives funding from the ARC, HFSP and DARPA.

Ingo Schiffner is a Postdoctoral research fellow at The University of Queensland.

She does not work for, consult to, own shares in or receive funding from any company or organisation that would benefit from this article, and has no relevant affiliations.

Got a news tip for our journalists? Share it with us anonymously here.
Tags:
amazon drone google hardware research science uav university of queensland