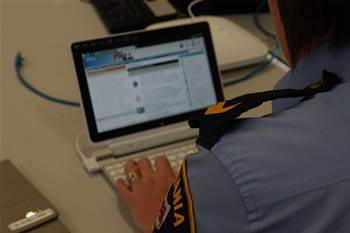 Rush to be first.

The Tasmanian police force has snuck past its Northern Territory counterparts and is likely to become the first Australian force to provide a tablet to every frontline officer.

The NT Police threw down the gauntlet earlier this month when NT Commissioner John McRoberts claimed the lead in a race to become the first force to roll out a device to every cop on the beat.

But with a tender process still to be completed, it will not catch the Tasmanians, who are already two-thirds of the way through their own 950-device rollout, which they expect to be finished in around three weeks time.

Following a trial in May last year, the Tasmanians picked the Windows 8-based Acer Iconia hybrid tablet for their frontline troops, which impressed Hutcheon and his team with its 18-hour battery life.

“We tried a lot of high spec devices that couldn’t get close,” he said. “If a tablet can’t get a police officer through though a shift then it is simply not good enough.”

Windows also gave the force a change management head start by offering police – not known for their tech savviness – a desktop they were familiar with.

“Being able to run a full version of Microsoft Office has also been a big benefit,” Hutcheon said.

There is nothing that an officer can do back on the station computer that can’t be done on the hybrid tablet, the force claimed.

As a result, it will seize the opportunity to start rolling back the number of desktop PCs it maintains in stations “dramatically”.

“In some stations we will have three desktop computers for about 30 officers. We might scale that back to one,” said Hutcheon.

Although the Tasmania Police has yet to come up with a figure for time recouped as a result of the mobility drive, Hutcheon said the biggest transformation will be turning time usually spent by officers waiting around crime scenes into productive windows of paperwork.

“For example if an officer attends the scene of a car accident, he can write up the crash report while he is waiting for the tow truck to arrive,” he said.

Many of Australia’s larger police forces are also on the path to mobility, led by Queensland which hopes to have 1200 iPads on the beat by the November G20 summit.

NSW has trialled an electronic traffic infringement notices solution from a mobile device, but is waiting on funding for a broader rollout.