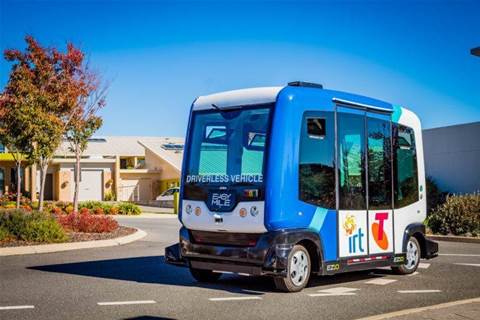 Autonomous vehicles have long been touted as an opportunity to increase mobility and accessibility among the elderly, but so far IRT Group is the only aged care provider to make it a reality.

The project kicked off at its Kangara Waters lifestyle village in Canberra where IRT essentially had to build everything - including the government approval processes - from scratch.

Executive general manager of IT, John Vohradsky, said the opportunity to deploy a driverless shuttle was identified through the organisation’s “push-pull” IT strategy of meeting the pull of IRT’s needs across its business streams while continuously identifying opportunities to push new technologies.

“We were looking to push the new driverless technology to see how we could meet three main challenges pulling on the organisation, like the isolation the elderly can feel when their family and friends move away or people they know pass away,” he told iTnews.

That issue can be compounded by mobility issues resulting from either an injury or the loss of a driver’s license, both of which can greatly impact on seniors’ independence and their ability to connect to vital community services.

“Before introducing the shuttle, some of these people hadn’t left their units in months.

“The only people they’d have contact with would be IRT staff,” Vohradsky said.

However, IRT knew from the outset that the initiative would be a loss-leading exercise.

“You can’t just go down to the corner store and buy a driverless shuttle. These things aren’t cheap to buy or rent, and there isn’t anywhere you can buy them in Wollongong or Sydney.

“And you can’t just put one on the road and have it go. You need to do tests and deal with the fact that every road rule in Australia assumes a human driver is behind the wheel.

“We decided to take one for the team because we were confident this solution would benefit our residents, but also the wider industry.”

Part of that involved working with the ACT government to develop an approval process, which essentially turned IRT’s submission into a template for future work. Even still, the project had to receive ministerial approval and a signature from the police commissioner.

Vohratsky also had to contend with a very conservative user base who weren’t thrilled with the reports fatal car crashes connected to Tesla Autopilot, electric vehicle fires or Uber’s fatal collision with a pedestrian.
IRT worked with French autonomous vehicle manufacturer Easymile to modify the standard operating software to make it safer for seniors and fit for the Kangara Waters Lifestyle Village’s mixed-use roads.

While IRT had initially thought of using an ad hoc, Uber-style offering, a routine shuttle bus on a closed loop proved to be easier to set up and more effective.

Residents who hadn’t left their units for months became unexpected regulars at the local coffee shop, and staff who were concerned about the disruption found it easy to modify their schedules.

Vohradsky said the positive outcomes showed how this kind of innovation could become “the new normal” in an industry often regarded as being at the back end of the tech adoption bell curve.