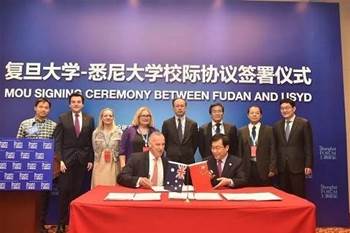 For artificial and biological intelligence.

The University of Sydney has teamed up with Shanghai’s Fudan University to tackle issues around brain disorders and artificial intelligence using each institution’s advancements in computer science.

Sydney University’s academic lead on the Brain and Intelligence Science Alliance (BISA), professor Sharon Naismith, said China in particular faces “immense” challenges in the coming decades when it comes to brain disorders in its aging population.

“Therefore research on the prevention, early diagnosis and early intervention for brain disorders is particularly urgent," she added.

While China is home to more than 20 percent of the world’s dementia patients, and stroke is the leading cause of death, research into the field is key for Australia as our own population continues to age.

In 2016, dementia and Alzheimer’s was the leading cause of death in Australian women, and the runner up to heart disease in men.

A number Australian universities have been exploring how to use artificial intelligence to help overcome brain disorders like dementia, including USyd’s own $2.8 million investment in a research centre to augment brain scans with AI smarts.

The alliance with Fudan University, however, will also consider artificial intelligence and computational science as well, and not just in reference to brain disorders.

The University of Sydney said BISA “will facilitate deeper cooperation between the two universities in the fields of data science, neuroscience and artificial intelligence,” complementing Fudan University’s existing interdisciplinary research platform in brain intelligence and technology.

Project funding from both BISA members will also be available “on a competitive basis,” they said, judged by academic panels from Sydney and Fudan.

Vice-chancellor at the University of Sydney, Dr Michael Spence, said BISA’s international efforts to combine health science and technology to benefit both fields will be needed to make meaningful improvements.

“The challenges of brain disorders, computational neuroscience and the ethics of artificial intelligence can only be addressed if we get the sharpest minds working on solutions,” he said.

“That’s why we are working with Fudan University on this important research.”