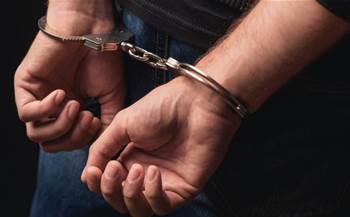 A Sydney man has been charged with telecommunications offences after allegedly making online threats to harm NSW Police horses.

The 65-year-old man was arrested in Paddington in inner Sydney on Wednesday following investigations by Strike Force Seasoned, which was set up in the wake of protests against Covid-19 restrictions last month.

Police allege the man posted comments on an unnamed media outlet's website earlier this week that referenced the protest and made threats to harm police horses.

He has been charged with four counts of using a carriage service to menace, harass or cause offence, which carries a maximum penalty of three years imprisonment under the Criminal Code Act.

Electronic devices, including a computer and mobile phones, were seized by detectives when carrying out a search warrant. The devices will now undergo forensic examination.

The man was refused bail and will face Sydney Central Local Court today.

The charges follow the arrest of anti-lockdown protester, Kristian Pulkownik, who is accused of punching a police horse during the protest last month.

Pulkownik was reportedly granted bail by a Sydney court on Wednesday after spending three weeks in custody.