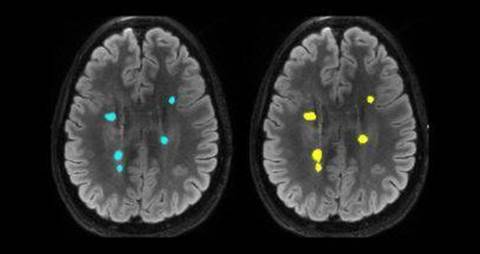 When it comes to cutting edge technology, ironies can sometimes be sublime.

The machines humans devised to imitate our brains through the development of artificial intelligence (AI) are now being deployed to analyse and identify how our brains work.

It's a growing market, because while we know some things about how brains operate at a physical level there still a lot we don't. And it's moving fast.

The Sydney Neuroimaging Analysis Centre (SNAC), which last year won a federal grant to enhance brain scans using AI, is now branching out and validating its algorithms for use in clinical settings.

“Previously, this would take our analysts 20 to 30 minutes with semi-automatic methods. Now, that’s down to 2 or 3 minutes of pure machine time, while performing better and more consistently than a human.”

Another tool being developed for use in research and clinical trials aims to help image analysts accurately determine the size of brain lesions - either to see how they progress over time or respond to different treatments.

Analysts typically segment the 3D images of brain lesions manually to determine their volume, a process which can take up to 15 minutes.

The measurements are sometimes guessed from ‘eyeballing’ the scans due to how long it takes to determine the size of the irregularly shaped structures. Meanwhile, SNAC’s algorithms can reduce that time to three seconds while also delivering more accurate results.

Now the centre is looking to validate these algorithms and integrate them with analysis tools already in use by clinicians so that scans can automatically be processed once they’ve been taken at a clinic.

The AI-evalauted scans would then be passed back to radiologists for viewing, giving them the analysis results without altering their workflow and providing a layer for reviewing the AI’s work.

Wang said integration with existing systems would also encourage use of the software, rather than adding extra hoops for radiologists to jump through to validate their work.

“Someone can develop a fantastic tool, but it’s hard to ask radiologists to use it by opening yet another application, or another browser on their workstations,” he said.

“They don’t want to do that simply because they’re time poor, often punching through a very large volume of clinical scans a day.”

Additional algorithms are in development and being validated for clinical use.

One compares how a patient’s brain volume and lesions change over time. Another flags critical brain scans, so radiologists can more quickly attend to urgent cases.